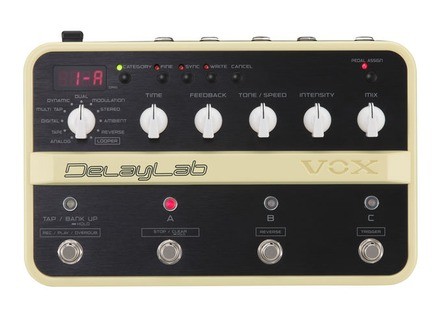 View other reviews for this product:
The Vox DelayLab is a digital delay pedal that has effects on it. It is very affordable costing only 200 USD. It comes loaded with 10 classic song presets and they are really good though I do wish that it came with more presets than that. The stereo looper is 28 seconds which is just enough for me. As far as delay goes, I have not used many units that have a delay as good as it is on this DelayLab by Vox. You have to give this pedal a shot; it is affordable enough to take a chance with it.

I have used many old school tape delays, and I have always loved how well they sounded. Most of the newer pedals and gear that is coming out is now so much different than it used to be. The Vox DelayLab reminds me a lot of some of those old tape delays that I use to work with when I was back in Chicago. It is well made and built to last. It is great for live shows and studio use and it will last you a long time.

The only thing that I would change about it is I wish they had more presets on it, though I am not a big fan of using a bunch of presets from popular songs. But sometimes it is fun to go back and replicate the sound of some of my favorite songs of all time.

There is no set up process involved, it is much better than any digital unit that is for delay. This will make you want to stop using digital stuff all together. I would purchase the DelayLab again if I had to. I am very happy with it and don’t have anything negative to say about it. It is just that good and I recommend trying it out!
Did you find this review helpful?yesno