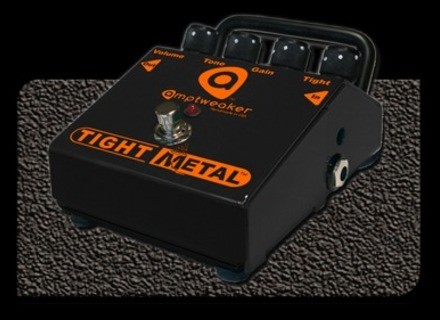 distortion pedal shop with a crowd of extras rarely found and never simultaneously.

one volume, one tone properly calibrated, a drive that enables tight and adjustment to tame the bass distortion in order to keep her tight.

There are also two mini switches, a thrash mediums to dig my faith too damn much and chomp that activates the noise gate.

The metal frame is very solid and very well thought to protect the knobs.
A
u of the radius that are not found elsewhere in addition to everything else that is already freely above the lot was an effects loop which allows you to insert a distortion pedal for pre or post distortion, a true bypass, the possibility of power with a battery (removable magnetic super convenient compartment) or a 9v or 18v ​​power supply in a Commissioning led and a switch which cuts the battery and let the pedal connected.

When the pedal is powered by an external power supply of the LEDs light up more permanently, to rebuild his practice settings and pretty on stage in the pedal board.

Pedal extremely functional and well thought out, I plugged into the input of a combo Orange AD15 Tube in its clear to play at home without having to leave the stack.

As mentioned in the title of my opinion, it is well named, it is a distortion could not be more metal but not metal gadget that makes you want to throw it to play on a real amp.
There was a real preamp sound quality, in the vein of what is expected of a 5150 is a wild distortion American well-fed low but accurate enough for the chiseled riffs that stop net (thank you the noise gate).
It's not super versatile but still a little, the settings are there to adapt the sound of the pedal to the material on which it is connected not to change the character of the device even with the switch in the off position thrash we are in a record sound more civilized.

This pedal is perfect in the sense that it gives me exactly what I expected of it and is designed in great detail, it's perfect to play the metal to sound levels say friendly neighbor!

This pedal like all amptweaker was designed with the help of the community of guitarists on the internet where the presence of all these more rightly desired by many guitarists.
This particular model was developed jointly with the guitarist of death metal band Misery Index.
Take a look at his set up for the curious on youtube, he uses it live in the power amp of his head, and it sounds.

This pedal has convinced me and I start seriously eyeing the rest of the range that seems the same level.
See the source
Did you find this review helpful?yesno
Cookies help us improve performance, enhance user experience and deliver our services. By using our services, you agree to our use of cookies. Find out more.