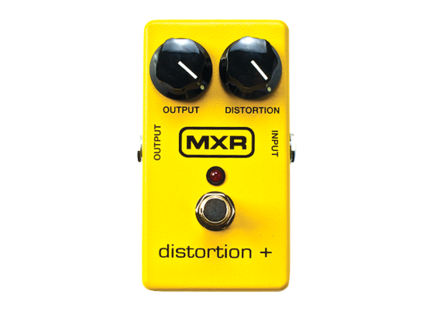 Buy this productView price information >
View other reviews for this product:
The MXR Distortion+ has been around since nearly the beginning of time. It was one of the first boost pedals to ever hit the market, and it has been used every since. While its popularity has been waning, I still see it being used on pedalboards today. The pedal features an output and an gain knob. The newer ones have LEDs, but aside from that, they're still fairly similar with the same input/output/switch/2knob configuration going on.

The pedals can take some ridiculous abuse. I've never had any problems with this pedal in my lifetime, and I don't expect it to ever break down, really. I've done a true bypass mod to it, but it really wasn't needed that much. The bypass on this isn't too bad, stock. The manual is well written, and if you need any help, MXR is more than happy to assist you. However, I find that it's not needed with such a simple pedal. It's so easy to use and set up that it almost seems like a waste of paper. Even the guitarist just starting out could figure out how to use this in seconds.

The most famous user of the MXR Distortion+ would probably be Randy Rhoads. He was a heavy user of this pedal in his Marshalls, and if you're looking for that tone, it'll deliver it. One thing worth noting is that this and the DOD 250 are actually very similar. The DOD250 is slightly more aggressive due to the diodes that it utilizes, but they're still very similar, and if you want that Yngwie style tone, this pedal can deliver. I find that it doesn't work great as a normal boost to tighten things up. It's a bit too vintage sounding, and it lacks tightness. In fact, it's starting to sound a bit dated today. However, if you're looking for that old school distorted kind of sound, running this through a Marshall would definitely deliver.

The pedal is solid, but it's getting to be a bit dated to me. I have one, but I find myself using it less and less. I tend to prefer tighter, more aggressive tones than this pedal can deliver, but if I ever find myself going back to classic metal, I generally pick this off my shelf and throw it in front of my amp for that old school metal tone.
Did you find this review helpful?yesno
Cookies help us improve performance, enhance user experience and deliver our services. By using our services, you agree to our use of cookies. Find out more.