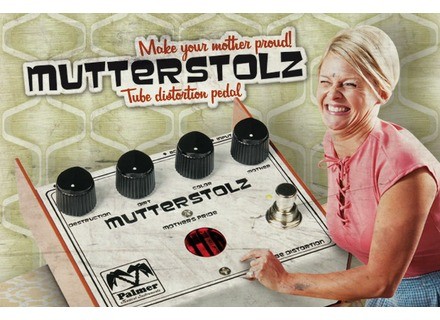 Mutterstolz, Distortion from Palmer in the Root Effect series.

Proceedings of a test conducted at Musikmesse with Audiofanzine (https://fr.audiofanzine.com/membres/a.musikmesse.html)

Overdrive pedal lamp (yes I know, sold under the label "distortion"), in a compact format, with a progress of the case to protect the In and Out jacks, "True Bypass", supplied with 12V 300mA (tube requires). 4 potentiometers names beautifully imaged. Everything exudes strength.

The originality of this pedal is the gain adjustment is done via two knobs: Destruction and Dirt. One manages the saturation another operates more like a fine combination setting a color adjustment. The two are interactive.
The setting called Color manages his tone, but it is not a simple high-cut as usual, on the one hand it highlights the highs, the other mediums. Mother is the output level, nothing special on that side.
Obviously, you spend more time with a tube screamer to find his sound.

Tested on a combo lamp of the same brand, the FAT50 with a Strat.
The amp set to a clear and right sound, an overdrive pedal offers starting from slightly dirty to crunch supported, with many variations of gain and grain through highly interactive knobs, but still quite transparent with respect to the guitar, too neutral for some.
I was a little disappointed in me saying much, but more useful for those who have a single channel amp, then I wanted to test it on an amp already saturated.

I pass on the second channel of FAT50, sets a very dirty but again neutral, transparent sound, I switched the Mutterstolz ... and then a slap!
His singing with a lot of gain, grain (always via customizable controls), the character, I am inspired and party in a long improvisation taking me for Gary Moore, Santana and Billy Gibbons! (All at once of course)

Do not get me wrong, I will not summarize this pedal to boost solo riffs going very well too! I started my review by noting the name overdrive for this product because if aggressive tones are possible, I have not managed to get his metal.
The Mutterstolz is effective on a clear, but a little too neutral, and truly reveals a distorted amp already. Very useful to revitalize an amp to saturation a bit bland or too vintage sounding when you want more gain.
See the source
Did you find this review helpful?yesno
Cookies help us improve performance, enhance user experience and deliver our services. By using our services, you agree to our use of cookies. Find out more.