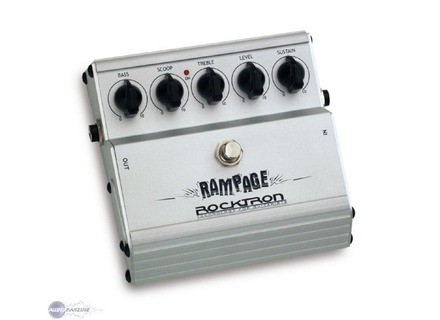 Rampage Distortion, Distortion from Rocktron in the Classic series.

View other reviews for this product:
See below

2 knobs for equalizer (bass-treble). a LEVEL knob that lets you adjust the volume of the distortion, a button that colors sccop very nice and the distortion to sustain a button .... yeah .. for the sustain ...

The manual is a bit bizzare on the other hand (it's just a page ..). It définise the button SCOOP as a Mid control but it's not really ca .. it is clear what will give the color distortion. It also defines the button as Sustain the gain of the distortion but it's not exactly it either ... M'enfin, do not read the manual for this pedal to go .. I put eight to the user manual not always realistic ..

That's exactly what I wanted .. to the base metal is typed and filled his role well but the RAMPAGE, is not that ca .. Scoop button allows a range of distortion that can hit the same rock and blues. the range of sound is very interesting. Unlike the silver dragon whose sound bite is enough ... the sound of the Rampage going very well for solos .. very smooth and precise at a time. The button is ausi sustain its effect or legato sweep .. it's a real treat ..

Aesthetics and strength really good too ...
See the source
Did you find this review helpful?yesno
Cookies help us improve performance, enhance user experience and deliver our services. By using our services, you agree to our use of cookies. Find out more.