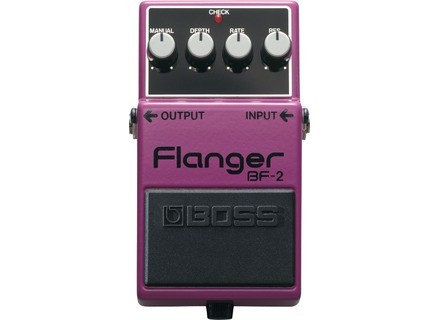 View other reviews for this product:
The BOSS BF-2 Flanger was made for over twenty years, twenty-one to be exact. It was sold from 1980 to 2001, when it was replaced by the BOSS BF-3 Flanger. It should be noted that the BF-2 is analog, NOT digital. The BF-3 on the other hand, is in fact a digital Flanger.

The controls are nothing out of the ordinary, and are as follows: Manual, Depth, Rate, Res (Resonance).
The BF-2 is are powered by a 9 Volt battery, or either a 12 Volt ACA adapter, or a 9 Volt PSA adapter. Which version you have determines the voltage you need. Some of the older, Made In Japan BOSS pedals were powered by an un-regulated 12 Volt power supply, and the pedal had a resistor and diode inside to both drop the voltage down to 9 Volts and to smooth it out. Converting those to run off of of a standard 9 Volt adapter is very simple if desired.

Tweaking this Flanger to your tastes isn't hard. It's a pretty standard control set, and as with all BOSS stuff, they make things pretty obvious. I can't comment on how well the manual lays things out, because since I got it used I didn't receive a manual, but you don't have to be a rocket scientist to figure it out.

My main genre is Thrash metal with some drop-tuned stuff thrown in. I mainly use this pedal to add some depth to cleans, and occasionally I'll use it for leads as well. This Flanger sounds pretty decent, especially considering I got it for $30. It does seem to add a slight volume boost when engaged, which can be annoying, but it's not terrible.

It can also tend to boost the low end too much sometimes, which works out fine for leads, but for cleans it just muddies things up a bit if you aren't careful. It might be fine though if you had a more treble-oriented amp, or if you are like me and have a 4x12 cab that can handle the extra bass without getting muddy.

You can also do the standard airplane-taking-off Flanger sounds with this thing, so if that's something you are looking for this can do it. It's also possible to get some pretty chorus-like sounds out of it as well, which is pretty cool. In general, it's a good sounding pedal. Is it the best Flanger out there? Most likely not. But it's not bad either, and if you can get it cheap it's a good pedal to check out.

Overall, this is a pretty decent little Flanger. As said, I got it for $30, and I definitely think it was worth it. I like that I can do more than just crazy sounds, but I dislike that it has a slight volume boost. Having used it for several months now I would DEFINITELY buy it again, even if I had to pay twice the price for it. It's one of the staples of my pedalboard, and I just don't see it going away anytime soon.

Get it if you are looking for a Flanger that can do anything from chorus-like sounds to airplanes taking off. Don't get it if you don't want to have to deal with a slight volume and bass boost.
Did you find this review helpful?yesno
Cookies help us improve performance, enhance user experience and deliver our services. By using our services, you agree to our use of cookies. Find out more.