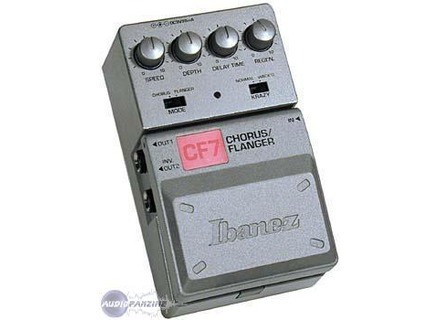 CF7 Stereo Chorus/Flanger, Flanger for Guitar from Ibanez in the 7 series.

View other reviews for this product:
Ibanez has a few pedals that are in this sort of plastic-esque, compact format. This is their flanger/chorus combination pedal, and just like the name says, it can do both a flanger type sound and a chorus type sound. It has four knobs and two switches that control everything. Starting from left to right, you have speed, depth, delay and regen. The two switches allow you to choose between flange/chorus and normal/wacky. Aside from that, it's pretty much your standard recently made Ibanez pedal.

The housing on this is decent, but I don't trust it nearly as much as I trust some of those old school Ibanez pedals, the metal housed MXR pedal or the Boss pedals. All three of those seem to be able to withstand a nuclear assault, but this one seems like it might break under heavy usage. However, I've never experienced that, and it's a purely speculative point of view. I like how the knobs can be pushed in so you're not constantly bumping the settings. That's a pretty cool feature. However, I also question the lifespan of the knobs if they're acting in such a way. I've had push/push pots break on me before, and it's a pain trying to fix them. I never read the manual for this, but it's a pretty straight forward pedal. You just plug it into the front of the amp (or the loop), and start twisting the knobs until you get something you like.

The flanging on this is decent. It's not the best flanger in the world, but it's also not the worst either. You can go from the standard "mild to wild," but it never gets as crazy as some of the higher end flangers, nor does it get as touch sensitive and 3D sounding as some of the old school flangers, and a lot of that has to do with the fact that it's trying to do two things at once. The chorus in this is decent, but it's somewhat sterile sounding. It's not as thick and liquidy as, say, a Boss CE2. It can get you a decent chorus sound, but don't expect miracles. The different switches add some versatility to this, but it kinda seems like they're tacked on instead of truly integrated into the circuitry like certain other mini toggle switches tend to be.

The pedal is decent, and you can find these at a great price on eBay. However, it's not the greatest pedal in the world, and there are some better pedals out there if you want both chorus and flanging. If you're on a budget, this should be able to suit you well. Just don't be surprised if it doesn't blow you away or if you find something that sounds better.
Did you find this review helpful?yesno
Cookies help us improve performance, enhance user experience and deliver our services. By using our services, you agree to our use of cookies. Find out more.