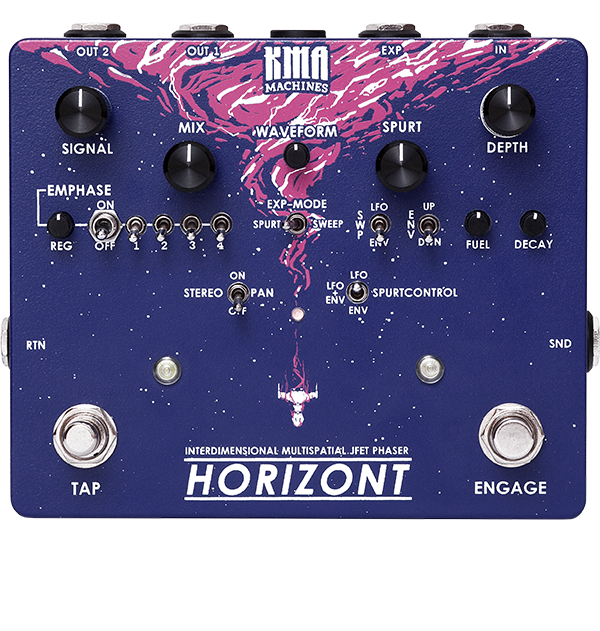 Published on 04/04/19 at 05:07
Value For Money : Correct
Audience: Anyone
SOUND:
The HORIZONT’s is inspiring to use, with its crystal clear JFET phasing tones. The sounds generated vary greatly, as there are dozens of possible combinations. In essence, you can think of the HORIZONT as a combination tremolo, vibrato, wah and phaser – and with anything between. The vibrato can take on a Leslie attitude as the tone pulsates from speaker to speaker (particularly when using the Stereo Pan option). The tremolo produces classic results and the phaser definitely can take you back to the 1990s. Those are the sounds in simple terms, but what the HORIZONT accomplishes is so much more as you can select what frequencies feedback, whether using a LFO or Envelop filter, whether the Envelop is up or down, what wave you’re using (there are eight, including ramp up/down, square, triangle, sine, sweep, random steps and random slopes), and how smooth or how much spurt you want in the signal. You can make the sound very subtle or dominating (with the Mix), short-lived or long-lived (with the Decay and Depth), and even how touch sensitive you want your guitar (e.g., with Fuel on low the effect is modest unless you hit the guitar strings hard, which then becomes very obvious).

The HORIZONT may be a touch complex, but it does come with an Exploration Guide so that you can achieve Classic Sounds (Phase 90, Smallstone and Univibish), LFO-Based Phasing, Envelope Phasing, Trem & Touch-Wah Style settings, as well as expansive section on Emphase-Settings (viz., effects you get by emphasizing feedback of the higher, mids and lower frequencies). I touched upon several of these examples in the demo video, but the point is that with about an hour of following the Exploration Guide you get a firm grasp as to some basic settings, and from there you can tweak to your heart’s desire to zero-in on the tone you want. And if you decide to attach an Expression pedal, be prepared for wah-type results that are so broad and sweeping that it would put any wah to shame. As well, there is an FX Loop, so that you can add a dry signal in front of the HORIZONT’s wet signal (try feeding in some delay or reverb for some spectacular results).

One of the best features of the HORIZONT is the EMPHASE switching system, which allows you to emphasize a particular frequency range and to what degree. Although many other aspects of this pedal helps to sculpt your tone, you can do a lot with the EMPHASE switches so that you hear more of the higher, mid or low frequencies, but also to produce an overdriven sound, oscillating granular sounds, and even synth-like fuzz and growling glitch sounds. There are so many possibilities that my 5-minute demo only touched upon a handful.

OVERALL IMPRESSION:
A ‘massive’ pedal (lots of possibilities), KMA Machine’s HORIZONT can generate so many sounds and variations of those sounds that for someone wanting a basic phaser this pedal likely will be too much. For those who like to tweak, and also get wah-type effects, tremolo, vibrato and anything between, then you may have found the Holy Grail. Certainly you can keep it simple and low in the mix (for some Funk-style results), but when you begin to crank up the mix, depth, decay, etc., you can achieve some fabulous soundscapes; coupled with some delay/reverb and hold on to your rocket ship as you blast into the outer realms of deep space. At 289 Euro the HORIZONT is not an inexpensive pedal, but you get what you pay for – from classic Metal phasing to trem & touch-wah effects and spacey vibrato in true stereo effect (the Horizont is true stereo out, but not in total a stereo pedal; the audio circuit in total is analog and the LFO section is the only one that is digital). And the ability to use an expression pedal (to mix pure clean to down and dirty) is a bonus for those who value their sound effects, besides having a Tap Tempo to precision time the beautiful noise. The HORIZONT is made for guitar, bass and keyboards, and so there is a lot of potential as you select which frequencies you want to feedback, which of the eight wave forms you want to use, and a host of other features. A strict rock-n-roller may not have much use for the HORIZONT, but for those who like to experiment and even produce synth-like or alien-type sounds that can be mixed with the raw tone of a guitar (or dominate it all together), then this a worthy consideration. A warning: the HORIZONT is addictive and you will wonder where the hours went as you become intimate with your new best friend.

GENERAL USE:
Fortunately there is an Exploration Guide with sample settings; otherwise, the HORIZONT would be confusing and take a long(ish) time to get to know. But once you get an idea of how to set it for vibrato, tremolo, wah-type tones or phaser (four basic categories), it then becomes fun to tweak and explore. Some of the general settings include the Signal (outgoing), Mix, Depth (the breadth of phasing sweeps), Spurt (phasing speed from smooth to sputtering) and Wave (e.g., sine, square, random slopes, etc.). You can make any of these aspects subtle or strong within your signal (I definitely exaggerated the qualities so that they come through with obvious intent in the demo). The other controls then create further character. The most interesting is the EMPHASE, which allows you to emphasize a particular frequency (whereas the Regeneration knob determines how much of that frequency is exaggerated or emphasized). The FUEL knob dictates the sensitivity of the envelope, which also has a bearing on how hard you pick your guitar (making the effect more intuitive and responsive). The Decay knob adjusts if you want a short or long wave (good for short wah-type sounds or very broad and sweeping phasing). The sweep can be based on an LFO wave or an envelope; the envelope can be up or down, and the SPURT control (how smooth or stuttered) also can be assigned to LFO, envelope or both. And to create even more atmosphere you can have the effect in true stereo pan if so desired (a nice throbbing effect in mono, but the result is best with two speakers/amps). On the surface there appears to be too much, but using the Exploration Guide makes it easy enough to navigate – along with a free afternoon of experimentation.

OTHER DETAILS:
The HORIZONT has some heft to it, although the chassis is aluminum (along with a powder coated paint job that is as cool to look at as it is to play). A moderately large pedal, measuring 5.5 (l) x 4.75 (w) x 1.75 (h) inches (14 x 12 x 4.5 cm), the HORIZONT’s Tap Tempo and the Engage footswitches are solid, whereas the Engage switch has a solid click when pressed on and off. Those footswitches are far removed from the knobs and toggle switches to prevent damage from regular use. All the large knobs are metal (the smaller ones are plastic), and their associated pots feel solid in quality when turned. There are ten toggle switches, all of which feel solid when selecting parameters. All the main inputs are located in the back, including In, Expression, Power and Stereo Outs. The three LEDs on the HORIZONT (Envelope Status, Tempo and On/Off) are low profile and will not be damaged from regular use of the pedal. There is a Send and Return (FX Loop) located on the sides. The HORIZONT requires a standard 9VDC power supply while drawing only 75mA of power. Overall, a good quality pedal, which one comes to expect from German engineers in Berlin.