What Are Guitar and Bass Pickups Made Of?

In this second article of our series dedicated to guitar and bass pickups, we'll take a look under the hood.

Magnets are at the core of pickups. Some have only one magnet, like the very first Rickenbacker pickups, for instance, which had a horseshoe-shaped magnet, or two big magnets side by side, such as in the Gibson Charlie Christian model. Other models, like the P90 (Gibson, once again) have only one thick magnet. In 1944, Clarence Leo Fender invented a pickup made up of several magnets, one for each string of the guitar, forming a series of "pole pieces" on the surface of the pickup. This pickup is present on the first guitar models marketed by Fender under the name Esquire and Broadcaster (quickly rebranded as the Telecaster). This type of design centers the magnetic field of each sub-section at the level of a single string. 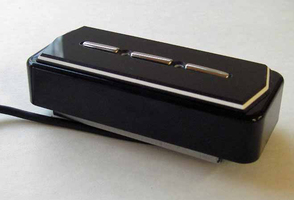 Diverse concepts were spawned from this initial design: One pole piece per string (Fender Strat or Telecaster pickups), two pole pieces per string (Precision or Jazz Bass pickups), one single pickup, but with a more substantial size (MusicMan Stingray pickups), pole pieces with adjustable height to compensate the level differences between strings in relation to the neck radius (staggered poles on '60s Stratocasters), and height-adjustable pole pieces with a screw (DiMarzio, G&L) to change the level of each string independently.

More recently, pickups with bar or blade magnets became trendy again among guitarists who like to play with a lot of vibrato and bending, in order to have an homogeneous magnetic field along the entire neck (see, for example, the Strat-like bridge DiMarzio adopted by Iron Maiden in the '80s, or the one Bill Lawrence developed for Dimebag Darell of Pantera in the 1990s and 2000s).

And there are some pickup brands that have opted for designs on which the magnets (bars or pole pieces) are not visible at all. Sometimes it's hard to tell what's hidden under the hood.

The material of the magnets is a crucial element of the pickup and, thus, its sound. The first pickups were made of soft iron magnets, in other words with iron or steel with a low proportion of silicon, which makes the metal very sensitive to magnetic characteristics, and fragile, too. 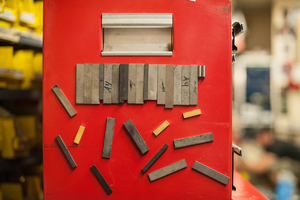 Later on, with the developments in the metal industry, so-called AlNiCo alloys were made available — a family of metallic alloys made mainly of aluminum (Al) nickel (Ni) and cobalt (Co). There are different types and they can be distinguished from each other, from a technical point of view, by their power, stability and the orientation of the magnetic field. The most common for guitar pickups are Alnico 2, 3 and 5 (containing an increasing amount of cobalt).

On the other hand, some manufacturers have adopted "ceramic" magnets. And I'm not talking tableware here, but rather complex crystalline materials composed of oxygen atoms and different metallic atoms, and whose magnetic characteristics vary depending on chemistry (type and number of atoms) and cristallography (how atoms are organized with respect to each other). The best known is ferrite, and unlike what its name implies, it's not a metal alloy but an iron oxide whose formula is Fe2O3XO (where X = magnesium, zinc, cobalt, nickel, etc.).

Finally, an alloy of recent introduction called Neodymium (an iron alloy containing neodymium, a rare element taken from the "rare earth" chemical elements of the periodical table) allows the creation of lightweight magnets with a powerful magnetic field, at the cost of an increased fragility.

No magnet can remain charged indefinitely, regardless of the material. As such, pickup magnets gradually lose their charge or demagnetize. This phenomenon can take several decades, but it's obvious on instruments from the '40s, '50s and '60s...Often, the sound of such legendary sounds is fruit of the complex alchemy between the aging of the wood and the electronic components. In the same manner as new guitars and basses are sometimes manufactured with a "worn" finish to look like older instruments, magnets are also demagnetized to sound as authentically "vintage" as possible.

By the way, since magnets are also an integral part of loudspeakers, the evolution of guitar pickups runs in parallel with that of the speakers found in guitar amps: from the use of soft iron magnets, then Alnico, ferrite and, more recently, neodymium (especially on bass amps).

The other part of the mechanism in charge of capturing the motion of the strings is the coil, which is made up of copper wire wrapped around the magnet(s). The material of the wire itself hasn't changed much with time (it's essentially copper covered with a lacquer so that each turn is isolated from the adjacent ones), but some vintage-oriented pickup manufacturers are nevertheless trying to find the exact specifications of the copper wires used in the '50s and '60s. 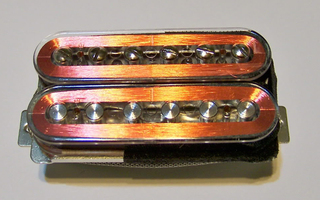 On the other hand, the diameter of the wire and the number of turns around the magnets is one of the most crucial levers and secrets to modify the sound of a pickup. The winding is traditionally done by hand with a simple machine that makes the pickup block with the magnets turn while you feed it copper wire. Nowadays, major brands and industrial models are made with machines operated by computers.

Each manufacturer has its own recipe, the most innovative among them try to shape the frequency response of the pickups to make endless versions of models adapted to different sounds and musical styles. The number of turns can be increased, for instance, to create an overwound pickup, which increases the pickup's output level but reduces its dynamics, or decreased to broaden the dynamics of the pickup, reducing the output level and increasing the sensitivity towards interference. The wire can be thinner or thicker, of higher or lower quality (regarding the copper's purity).

Vintage fans try to replicate the sounds of the most legendary pickups by the most renowned brands: The wire, number of turns, all painstakingly reproduced or reinterpreted with a personal touch… Leo Fender used to wind his first prototypes by hand in the early days of Fender, then in his lab at MusicMan or G&L, but ever since the end of the '50s, an employee whose name gradually became a household one was responsible for winding pickups at the Fender factory and then at the Custom Shop: Abigail Ybarra ─ whose initials can already be found on the back of the Strat L series ─ worked at Fender until 2013.

No, I'm not going to start rambling about scrapbooking here, I'm going tell you how the two previously described parts are put together to create a pickup. In order to shield the circuit as much as possible from magnetic interference and eventual mechanical shocks, the coils used to be wrapped in a cloth sheath. Other protection techniques were developed with time, like soaking the coils and magnets in wax or paraffin to permeate everything with an isolating material, or even soaking them in epoxy to shape everything into a rigid block.

The magnet + coil bundle is then fitted into a box, usually made of plastic and sometimes covered with a metallic cap, through which you can see the magnet's pole pieces, or not. And it's precisely this cap that gives a pickup its final allure. The forms they take are sometimes intimately linked to a type of pickup, and some other times completely independent. 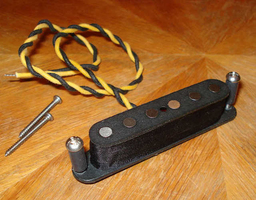 One wire (or more, as we'll see later on) comes out of this box with two conductors to connect the pickup to the rest of the instrument's electronic circuit. This wire has specific characteristics (diameter, type of shielding) and which type is used depends on the design of the pickup. Vintage fans argue that the relative shielding provided by the cloth sheaths from the '50s of '60s (in relation to modern plastic ducts) play a role in the pickups performance and sound. Manufacturers who hold this point of view sometimes offer this type of wire for their pickups.

Also note that the more shielding a pickup has, the less prone to interference it is, but also the more complicated it is to take apart for eventual fixes...Indeed, pickups can break and be repaired. The copper wire can get torn (inside the coil or at the ends) or the magnet demagnetized. And some artisanal pickup makers are also in the business of repairing damaged pickups. But how can you repair a pickup entirely molded into a solid resin block?

Join me next week to talk about the different types of winding.