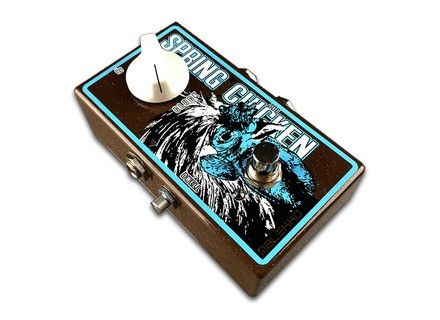 Just about the easiest pedal on the market to use. Just one knob, labeled “cluck.” It basically controls both the intensity of the reverb as well as the length of the decay time. These are actually digital, as are most reverb pedals, despite a lot of opinions to the contrary. No springs to worry about, and they won’t spiral out of control into an analog mess. A cool mod for these is the addition of a dwell mod which Malekko will install for a fee. It turns them into a more ambient type reverb. Certain limited edition versions of the pedal come with the dwell mod stock.

The sound of the Spring Chicken, is both unique and difficult to describe. I’ve never heard anything like it on another reverb pedal. Almost like a true spring reverb with a little something extra. The decay isn’t really consistently downwards, there are number of peaks that almost sound like echo/delay within the trajectory. Definitely not your standard ambient/hall reverb. I understand that the addition of the dwell knob can turn it into a more atmospheric pedal, but have never used one of those and can’t verify it personally. But for any kind of classic rock, blues, etc, this makes a really killer reverb pedal.

Probably the coolest sounding spring style reverb I’ve ever used. Unfortunately, these are now discontinued, and pretty pricey/difficult to get a hold of. Ebay prices seem to chart between 250-300, and I’ve seen the limited edition ones go for over $400. That said, I’ve picked two of these up over the years for $150 each, so it’s quite hopeless. Other solid reverb pedals include the Strymon Blue Sky, Eventide Space, and Neunaber Wet, and Dr. Scientist RRR. Malekko has since released the Spring Chicklet which isn’t quite the same. There isn’t really anything quite like the Spring Chicken (and it looks incredible on your board).