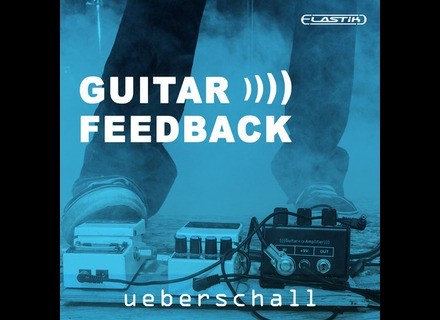 Guitar Feedback claims to explore "the huge range of sonic possibilities" allowed by the interaction between an electric guitar and a loud amp.

According to Ueberschall, this Elastik library includes 940 MB of samples and 138 individual loops organized into themed categories based upon the style of performance and original tempo. Performance categories include single note runs, chord sequences, slide chords and single note runs, e-bow sequences, wah-wah, harmonized parts all, of course, featuring beautifully (and sometimes barely) controlled feedback. All the audio is presented at 24-bit, 44.1kHz resolution and loops are up to 16 bars or 48 seconds in length.

With all loops recorded to a fixed tempo, the sounds can be set into a rhythmic bed or used in isolation. Whether it’s for an experimental musical project or to add a little sonic edge to some sound design, these loops are said to give the user full control with authentic-sounding results for either film scoring, web apps, jingles or music production.

Ueberschall‘s Elastik Loop Player allows matching the loops of Guitar Feedback in speed and pitch to match your song projects. The browser manages all Elastik libraries for immediate access to all loops: hence, not only can loops of a single library be combined freely, but  all installed Elastik libraries can be mixed and matched.