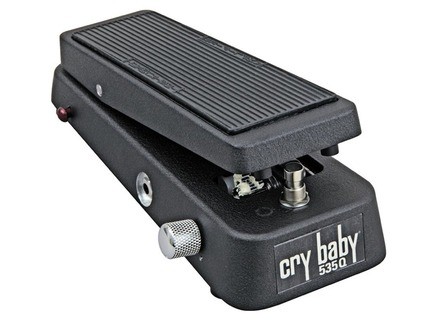 A wah wah, the splus complioqu to use them is at the ankle joint that was going on ...

Bon ben cl me that I have things to say
if your fans of Jimi and Stevie, do not look, c'st one for you!
wah is the only capable of sending such a sound of tearing the brain you fuck the guts and heart. The hardest thing is the desire to rsister smash the guitar on the amp ...
in addition to the sparamtres to make it rglages trs versatile, it Paut be sweet too ...
otherwise, for the grain, it's a dunlop .. it sounds neither like a vox (the default is that it does not let serious, when you are sonoriss is blatant and ugly, even if the best grain c wah ) or as a morley (is there someone to love the sound of wah?) or as a boss (the V-wah, which is the best sound Univibe ...)
I put 10 because there is no more
Obviously, Selmon guitar and amp with whom you connect everything, may vary ... So try your stuff

1 only regret: it is versatile, but analog, so there is no memory to save countless rglages, one must have in his brain, his ear and his fingers ... I will therefore 9
See the source
Did you find this review helpful?yesno
Cookies help us improve performance, enhance user experience and deliver our services. By using our services, you agree to our use of cookies. Find out more.