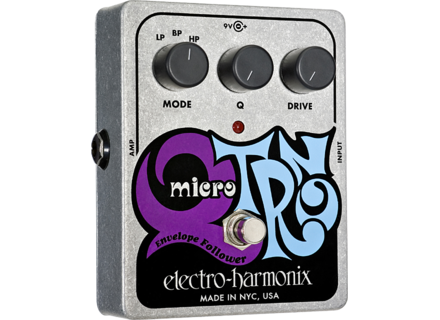 Buy this productView price information >
View other reviews for this product:
This is an envelope filter, ie a wah that is Contrle by a shell which they dpendent the same characteristics of the guitarist, wholesale c ' is a wah whose amplitude is Contrle not by foot but with the right hand - or left if you are left handed ...
Well, in short, this is THE sound of funk 70s, used by Stevie Wonder, Curtis Mayfield, Marvin Gaye, Bootsy Collins.
There are three knobs: one Contrle which band opre filter: Low, Medium or Treble. The second call Q Contrle the amplitude of the filter, and the last Drive Contrle attack the sensitivity of the effect.
This is a rdition smaller Mini Q Tron, we can finally add any Pedal Board without taking the place of three pedals, and other suitable Dtail can be feed it with a alime stadard or a garland effect.
You need a screwdriver to accder the battery. It's not great, but not the sea to drink either.

I use it with a guitar. It takes a little fiddling before finding the sound you seek, since it depends a lot of his own game. That said, the three positions are usable. I have a preference for the LP (low pass) after me who offers the most classic sound of the wah wah, and in addition allows galemnt get noisy effects look great. .. effect. Exactly.

Good sound, it's just legendary. Whatever the method adopted was a sound that is a whole section of the amricaine legendary black music. But not only. It can also push the gain and playing chords very violently get Sonic Youth sound on discs such experimentally Jet Set & Trash and Goo.
When using the HP and LP filters, there is a large transparent sound, however, when using the LP filter, there is a boost of volume and audible gain, but we must see that it is as the most effective filter and one that allows for the most punchy sound, and the most funky altrations. But you can not have your cake and eat it too, we must strike a balance between efficiency and noise. Well, it's like trying to save Ann Peebles without the micro saturates !!
In the myth, and despite this BMOL, so it's 10 for the sound quality.

There are effective effects, those who do the job, those who frankly beautiful and on top of that are INSPIRING!
Q-Tron part of this CATEGORY. It is dirty, difficult to master, but buying is like to be an afro if tltransporter Memphis, Stax studios along with Booker T and the MGs and the Bar Kays.
One can also fly away from in noisy worthy of Sonic Youth. From the ct it will leave some imperfections sound, gain it brings to focus only on the warmth and personality of this mythical effect.
It's time to put the funk in your sound - and it's not the music I play. One can just as easily use the effect as an alternative to Cry-Baby to obtain Hendrixiens sounds, we can also learn from Johnny Greenwood and out of the space vehicles sounds Radiohead.
In addition, 80 euro, the quality-price ratio is mortal.
See the source
Did you find this review helpful?yesno
Cookies help us improve performance, enhance user experience and deliver our services. By using our services, you agree to our use of cookies. Find out more.