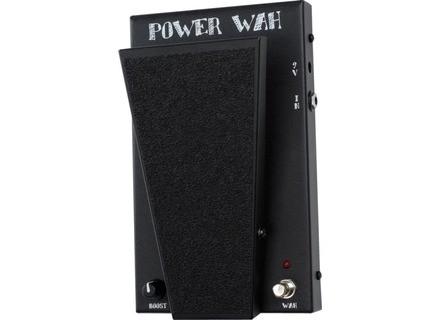 View other reviews for this product:
The Morley Power Wah (PWO) is a simple wah wah pedal designed for use with electric guitar. It certainly has one of the sturdiest casings that I've seen with wah wah pedal, and overall has a great sound to boot. The pedal is made up of analog components and has 1/4" connections for input and output and also has a jack for a nine volt power supply. It isn't rackable as it is a foot controller.

The configuration of the Morley Power Wah makes it extremely easy to use. You simply use the foot pedal to control the amount of the effect you'd like to use, in addition to the overall output level knob. Unlike the Dunlop wah pedals, it has the button to engage the effect on the size of the foot pedal, so you can actually see if the effect is engaged or not. I don't think that you need the assistance of the manual for the Power Wah, even if this is first wah pedal that you're using.

The Morley Power Wah definitely has a vintage type of wah wah sound, and is different than most of the other wah pedals that I've used. While of course the sound is in the same vein as other wah wah pedals, there is definitely something unique about the pedal that is hard to put your finger on. I've used the Morley Power Wah with a Fender Stratocaster and a '65 Fender Deluxe Reverb amp for a few different recording sessions where I wasn't the individual playing, rather I was the engineer on the session. I was overall very pleased with the wah tones that we were able to get out of it, as we were definitely looking for something gritty, which is what we got!

While a bit more expensive than the Dunlop Crybaby, the Morley Power Wah is still priced very well and is absolutely a pedal that you should check out if you're in the market for a wah pedal. My favorite thing about the pedal has to be it's incredibly sturdy design as it is built like a brick and built to last. I'd encourage those interested in getting their first or a new wah-wah pedal to check out this one in addition to the Dunlop Crybaby and a few other models out there to see what will work best for you, as there really isn't a wrong answer between this and the Crybaby!
Did you find this review helpful?yesno
Cookies help us improve performance, enhance user experience and deliver our services. By using our services, you agree to our use of cookies. Find out more.