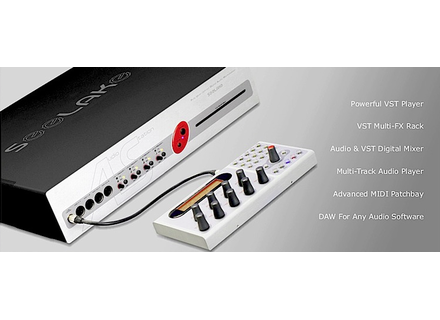 SeeLake will attend the Winter NAMM 2014 where they will introduce two new versions of their AudioStation hardware plug-in host.

The AudioStation, that we could discover in 2012 at Musikmesse (see this news), is now a range of three products with the addition of the X64 and 3D versions that will debut at NAMM next week.

Both new AudioStation units are designed for both live and studio use and allow for direct play with VST 32 and 64-bit effects and instruments.

Complete connexion allows for direct plugging of microphones, guitars, basses, keyboards and even MIDI controllers and pedals (8 assignable MIDI I/O are available). A WAV and MP3 audio player is also built-in and supports up to 24 mono/stereo tracks.

You can also use the AudioStation as a DAW by installing a Windows 64-bit-compatible software (Ableton Live, Cubase, Nuendo, Pro Tools, WaveLab, Sonar…).

The AudioStation X64 is built around a new 64-bit OS optimized for audio signal processing and the number of inputs and outputs has been extended compared to the first version (10 ins and outs, 8 on v1). Also new, the AudioStation X64 can be remotely controlled via an iPad or a remote controller.

The second model that will be introduced at NAMM 2014 is the 3D AudioStation, a version that is dedicated to multichannel and 3D processing, with setups of up to 5.1 surround. It will ship with a 3D processing plug-in suite, which includes the Audio Depth Spherical Surround. SeeLake adds that this version was designed for live use in theaters, concert halls or post-production studios.

Full details of these new AudioStation hosts will be announced next week at NAMM.