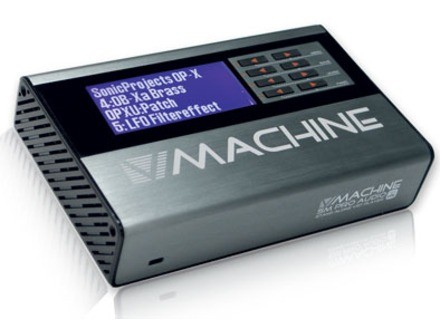 « The hardware VST box you "love to HATE", but just can't do without! »

Value For Money : Excellent Audience: Anyone
View other reviews for this product:
This little box here is definitely the most "controversial" piece of gear over the past 11 years. The V-Machine had a great run for several years almost a decade ago, but Harmon bought-out SM Pro Audio and ceased its manufacture "and all support", ...at the same time leaving their website up (I guess to "tease" everyone). The V-Machine is a VST host hardware box, although it is not that powerful by today's standards and somewhat (sometimes extremely) difficult to load VSTs into (from a computer), ...that is until you understand everything about this unit (if you're a "geek" like me). On the positive side, it can be plug-n-played right out of the box, and that's OK ....works great! ...and is loaded with a lot of very useful sounds. The pre-installed VSTs you get varies depending on the "version" you have and the "geographic area" the unit was marketed for).

...but most want to load other/better sounds/VSTs into it (hey, isn't that what it was made for?). ...and that's where things get complicated. It is "definitely" NOT user-friendly in this aspect. Many (if not most) have had a very rough time with this thing and eventually ditched it. Most of the hardships stem from lack of resources/power of the unit itself, and lack of ease of importation of plug-in files to the unit due to license security, Windows (Linux Wine Layer) registry issues w/some VSTs, and (most of all) complete lack-of-support due to the company shutting-down (thus, lack of Wizard files and other updated files).

Some have complained about the internal CPU "fan"-noise, which really doesn't bother me. I use the box for live performance so I really don't see or have a problem with this, and "if" I was recording via its output jacks ...you wouldn't hear the fan anyway. One of the other weird quirks with the box is USB sticks. The unit sometimes does not work well with certain brands of USB thumb-drives, so it's been reported to use SanDisk Cruzers. On a positive note, the unit can be slightly upgraded, which in turn fixes issues with some VSTs (crackling, polyphony, drop-outs, etc.) and overall enhances its usefulness. The internal memory can be safely upgraded from 512Mb to 1Gb, and the internal storage (CF disk) can be safely upgraded from 1Gb to 8Gb. I have performed these upgrades on my units as shown in the upgrade video by Matszh on YouTube. https://www.youtube.com/watch?v=QsWEKR6tEFM. There is also a 3rd-party website completely dedicated to support of the V-Machine that has all the manuals, tutorials, VXF client program files, wizard database files, etc. at https://bahmi.com/vmachine/. The most comprehensive document on the V-Machine (in French, last update 2018) can be found on Audiofanzine as a .PDF. at https://medias.audiofanzine.com/files/sm-pro-audio-v-machine-aide-memoire-ld-476333.pdf.

So in general, this unit is old, outdated, and has issues. However, the bottom-line is, even in 2019 ....THERE IS NOTHING OUT THERE THAT DOES WHAT THIS BOX DOES FOR THE PRICE ($150 to $300). You would think that SOME company would have come along and picked-up where SM Pro Audio left off, since there still seems to be quite a demand for a unit like this. The only alternative and next-step-up would be the GSi (Genuine Soundware) Gemini for $900 or a Muse Receptor (now the Peavey Muse-box) for over $1K.

BUT, ....once (or if) you get past custom-loading and setting-up this box properly, ...IT ROCKS! I am completely blown away at what comes out of this little 7"x5"x2" box that I can hook up at a gig in one-to-two minutes. Yes, it is limited to using older VST/VSTi's that are NOT "resource-intensive". However, the good news is that some of the best older VST sounds out there (and are some of the ones I currently use on my laptop) such as VB3, Lounge Lizard, OPX, and Messiah come on an included disk called the "Classic Keys Collection", which is "what gives this little box its worth and usefulness". I am an organ-freak, and my personal opinion is that this box running the GSi VB3 organ/leslie emulator out-performs other hardware organs like Ferrofish B4000+ and the Korg CX-3 (both of which I have owned and tested). I now own three of these units. For live use, it quickly plugs and plays, is very stable, and VST parameters can also be controlled via "external knob/slider controllers" in real time during performance. I am currently using one of my V-Machines completely dedicated for control by my sax and EWI, mostly to run the GSi MilesTone trumpet VST triggered by a transducer on my sax thru a pitch-to-MIDI converter.

Beware of buying one of these through Amazon.com, no matter who the seller is. The Product Title/Header always "falsely" states that the unit comes with the "Classic Keys" Disk, but when you scroll down to the product Description area, it always has a disclaimer that says it "does not" include it. If you want one, try to get one with a Classic Keys Disk and seek purchasing it thru Reverb.com or other seller.