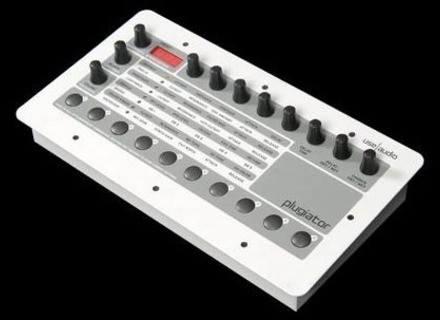 View other reviews for this product:
How long have you use it? A little over a year
What is the particular feature you like best and least? The sound is absolutely stunning. It's pure juice Creamware on quality sound, but trs, trs stable (those who had the cards in their machine Creamware understand me). I suffered no crashes of the machine over a year.

on the other hand, can not be used srieusement (sound design) without a PC or Mac connected to it. And the quality of the graphics editor is simply disgusting. This is the review in part priori (trs graphics below the norm, not at all friendly approach to save your presets - a blow to both, the preset is not stored correctly in the card, and the instruction of another sound makes you lose your job)

To properly program the ASX, a CONTRL outer surface is absolutely ncessaire. Yet that too, again in a serious effort is done in the doc. Plugins are only four documents, there is absolutely no information about the other four, and hello to assign MIDI CONTRL to the ASX. In addition, it is essential to have two MIDI interfaces on the machine that CONTRL: a USB (because the editor only works via USB), MIDI over another "normal" to control the sound.
As the plugin version of CME keyboard, it is also good at his (same card), but virtually unusable from the front of the CME. MAC or PC required, even live.

In terms of plugins, even when the choice is quite thin, and the website "forgets" to prciser only one plugin can run both. If you want more plugins at the same time, we need as many plugins as ASX. Note also the absence of multitimbral.

I regret that others give opinions on the product of AF are a little "commercial" and forget to prciser certaisn default product. For example, I find that inflated the ASX has the sound of FM DX. It is simply not true. The ASX has a sound INTERESTED, but certainly not that of a DX, especially as the ASX is a 4 oprateurs (like TX81Z) and not June 1 as the DX7 oprateurs. So the sound can never be the same case.

Similarly, since early 2009 UseAudio announces the release of the VSTi CONTRL ... It is still not available on Windows and even less about Mac.

Regulation is missing a line between stro. Mono microphone input can only be exploited for the vocoder. For the other plugins (all of which offer a mix between with this) is compltement crtin and lose the possibility of cascading several machines, and most importantly, would have had to spend his entering plugins (the Minimoog did ... why so good a formulation does not?)

Have you tried many other models before acqurir? No
How do you report qualitprix? Trs good
Exprience with, you will do again this choice? Yes ...
See the source
Did you find this review helpful?yesno
Cookies help us improve performance, enhance user experience and deliver our services. By using our services, you agree to our use of cookies. Find out more.