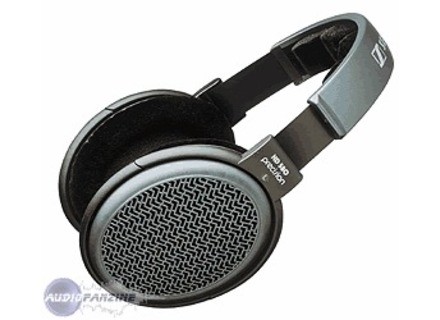 HD 580, HiFi/audiophile headphone from Sennheiser in the HD series.

View other reviews for this product:
The Sennheiser HD-580's are a set of high end studio headphones for all purposes. I don't own these headphones myself, but I often work with a producer out of his home studio and he's got these there. It's kind of a small space, so having headphones to help isolate sounds in there is definitely important. I haven't really used these in any other capacity other than listening during and after recording to get another perspective. However, they're certainly useful in other situations including monitoring during recording for players, checking mixes, and simple listening. The HD-580's are pretty big headphones and fit all the way over your ears. They're definitely pretty comfortable as I can see myself using them throughout a full day without it getting annoying or hurting too much since they're soft. In terms of sound quality, they're definitely nice sounding headphones as they seem to present a full and clear picture of your sound. They also have a very nice and rich low end presence, which isn't something too common with headphones in general. However, they're also well rounded with solid high and mid frequencies response as well. While the overall sound is impressive, I still wouldn't mix with these since I just don't think mixing on headphones is a good idea in general. Although the Sennheiser HD-580's are very nice headphones overall, I do think they're a bit overpriced. I honestly like the HD-280's just as much and they're a fraction of the price. Unless you're really looking to spend a lot of dough on a single pair of headphones, I'd still shoot for something like the HD-280's as they should do the job more times than not. That's no knock on the HD-580's themselves as headphones as they're awesome headphones, I just don't think they're worth the expensive price tag.
Did you find this review helpful?yesno