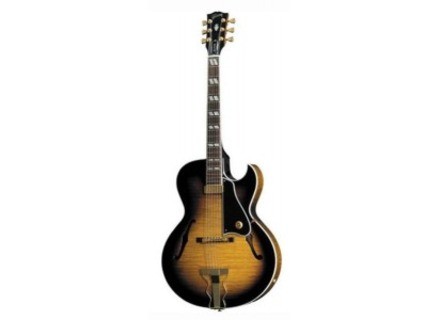 Value For Money : Excellent Audience: Advanced Users
View other reviews for this product:
I bought this guitar secondhand from a German collector for 1700 euros.
It was crafted in the Memphis factory in 1994.
I previously tested a 175 '59 Re,wich was a real sh.... For 3500 euros you would expect better, but Gibson isn't any longer what it used to be. That's why I went looking for a secondhand one.
Even then, the finish wasn't the best, but it was clearly better than on current models.
I got it with a Benedetto B6 pickup, but I replaced it with a 57 Classic, which I prefer to the original 490R. The latter is too twangy for my taste.
I wanted a smoother sound.
The bridge is made of rosewood.
This model has both controls integrated on the top. I prefer that to having one single knob on the pickguard.

The neck is perfect for me, neither too slim nor too thick. It's easy to get familiar with it and you can lower the action without it sounding bad.
I play with D'Addario Chrome strings, flatwound, 12- 52.

It's a guitar made for jazz, so don't try to do anything else with it.
I love warm sounds. So I set the tone control to 2 or 3.
The clean sounds are very nice, without a doubt, but that's not what I was looking for.
I use it mainly with a 1984 Roland Cube 60 MIJ and a 1983 Roland Bolt 60.
I used it some time with an all-tube Fender Blues Deluxe, but I love the neutral sound of the Roland Cube 60, which, incidentally, is lighter and easier to transport.
But, once again, it's always a matter of taste.

I've played it every day for a couple of hours since October 2012 and I think I waited too long to get it.
It's certainly worth its price (especially secondhand) and I wouldn't change it for a 175 because I think one of the pickups is useless and only puts more weight on the top.
The perfect guitar does not exist, but I think this guitar is a must-have for jazz.
At least in my opinion!
Did you find this review helpful?yesno
Cookies help us improve performance, enhance user experience and deliver our services. By using our services, you agree to our use of cookies. Find out more.