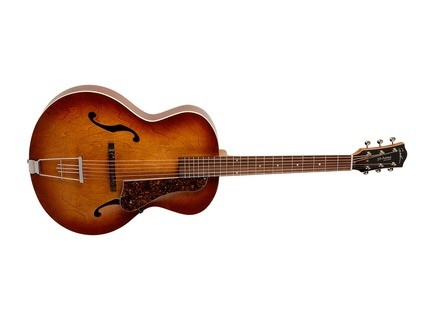 Buy this productView price information >
View other reviews for this product:
Canadian Guitar vote and bottom molded table easel with adjustable rosewood bridge (not unlike floating which says t), F Oues in traditional colored borders crme.
The table, the bottom and sides are cherry wood, the handle is in Saddle money with a rosewood fingerboard.
The tailpiece is a "trapze" but less "travaillquot, that the picture of AF (the prototype of the NAMM 2008)

The handle end and perfectly trs "rolling" is prima facie dconcertant (it's like an electric and one wonders if srieux a sound), but use was quickly to worship ... the jouabilit is frankly excellent and fits perfectly the coup and the agreement despite the phosphor-bronze strings!
No pan shot is in sharp ACCS is ordinary, nothing less ...
The ergonomics are perfect! The guitar does nothing and is a PSE rgal play both standing up with strap, while seated in front of a btement partoches (trs the low thickness of the body has much to do).
The sound ... that it has the will gte, I arrive in the next section.

Vote thanks his table and his back also trs bomb bomb guitar projection from gaining a 1 / 2 Standard Box, but do not expect a miracle ... it is far from a trs dread and even a copy of Selmer.
The sound is "bizarre", which is both its charm and the weak point of this guitar ... try to imagine a shuffled copy of dreadnought and Selmer sustain a low trs, all associated with the sound a little low projection of an old classic ... has given an ide!
Solo, attacking the strings with strong trs mdiator a trs drive, we get a sound that fits well trs a jazzy style acoustic blues. In rhythmic cons, hard to get out of the blues, period ... a terrible lack of sustain me. This is particularly original but trs!

I possde for a month and a half in color. If I t first glance IMMEDIATE sduit by its originality and design, I am today plutt whole of this purchase by ... outside of the blues, it seems difficult now to use this guitar to sound so special.
I love the handle, ergonomics, ease of play the guitar but the sound that had so much to sduit dpart me parat rev limit in effect dsormais.
The report qualitprix seems perfectly justified (no competition from any fawn on such models), but with the exprience I would do not have that choice ... j'achterais plutt a Gitane gypsy (I have not tried before this purchase).
Either I go up a micro-floating on the guitar, or sell it ... in the state, she would quickly tire finally trs. :-(
See the source
Did you find this review helpful?yesno
Cookies help us improve performance, enhance user experience and deliver our services. By using our services, you agree to our use of cookies. Find out more.