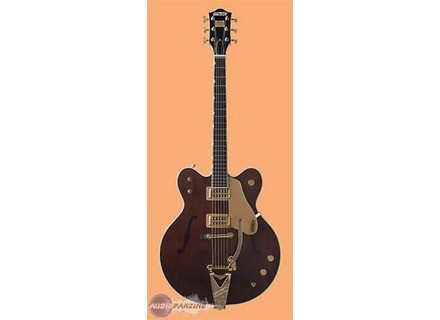 A beatle george guitars this instrument is a true marvel.
American-made, it has two humbucker pickups Filter'Tron (1 serious, 1 acute) that can alternately select or both simultaneously. they each have their volume (bottom right of the box). This model also has a master volume in the lower left. the two switches in the upper left are for the first pickup selector and a selector for the second dial tone.
The switch on the bottom right is the on / off switch on the guitar.
output jack on the underside of the body is stereo
The original models have an additional switch that activates a damper located between the nut and the micro acute.
The handle has the half moon inlays feature of the mark and a zero fret for easy play at the top of the handle.
this is the fact that the finishes are particularly neat: Grover, hides in the back of sky box

The playability of the neck is exceptional compared to other guitars half boxes. The best is to try to realize it.
the guitar is fairly balanced and ultimately rather lightweight compared to an Epiphone Sheraton II, for example.
the fund also has the peculiarity that the gills are not real but painted on the body, which has the important advantage of reducing the risk of feedback when playing at high volume. This also feel the guitar vibrate when you play near the amp.
In terms of sound, microphones are extremely well balanced between bass and treble, all is under the fingers of one who plays. do not expect to sustain too long: this guitar is mid way between the telecaster for the attack and a gibson 335 for the balance of sound and sustain.

This guitar is not suitable for all styles but all the guitarists can find an interest, not least by the manufacturing quality of the instrument. So when it comes to amp, there are more qualities and faults of brands: a fender hot rod deluxe found a clear and precise lens, a marshall Bluesbreaker, it will be balanced but also more fat and crunchy on attacks.

I use this guitar for 3 years. The model that I have apparently date from 1964 and has aged very well. Its only flaw is that it does not agree if the bullies a little contrast to newer models. But it has never been a problem for fans of rock and roll. www.gretschguitars.com
See the source
Did you find this review helpful?yesno
Cookies help us improve performance, enhance user experience and deliver our services. By using our services, you agree to our use of cookies. Find out more.