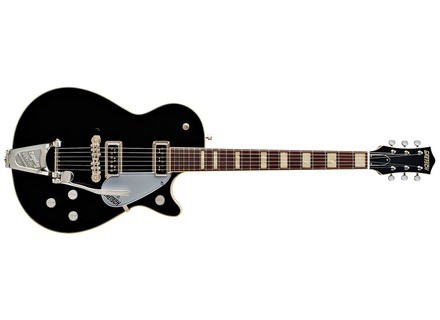 Gretsch guitars have been around in one form or another for quite some time and survived through the last half century or so of big name instrument company wars. In 2002, Fender Guitars took control of production of the Gretsch line. Since then, manufacturing has been done in Japan, and many Gretsch fans agree that the Fender reproduction models of classic Gretsch guitars are every bit as good if not better than their vintage counterparts. One of these vintage reproductions is the Gretsch Duo Jet. Featuring a hollow (not chambered) mahogany body, two filtertron pickups, bigsby tremolo, an ebony fretboard, master volume, and Gretsch's unique tone switch, this is really a classy yet very functional instrument. Everything about it is old school and faithful to the original. 22 fret neck. Volumes for each pickup. Open style tuners. The neck however is a bit thinner than many players might expect. And this should be taken into consideration for those expecting something with a bigger Gibson profile.

Not all guitars can look great as well as play effortlessly. The Duo Jet manages to hit the mark fairly well on each end. While the neck may be thin for some, it is fast and comfortable. The ebony fretboard is smooth and the guitar is light and comfy due to the hollow body. Tilted in the downward position it starts to sound a lot like an old Les Paul. The Bigsby feels great, like an old friend, but be warned, my Duo jet could take only a few tugs of the bar before it began to lose tuning. Perhaps the nut could be filed to fix this.

The sound is vintage Gretsch. Chimey, jangley, raunchy filtertron tone is served up in spades here. Interestingly, the tone switch located next to the pickup selector can get you some additional sounds. Through a cranked AC30 the Duo Jet is very strat-like in a way, expect much angrier. Plugging into my Hiwatt reissue I get an open tone somewhere between angus young and Pete Townsend. Using the tone selector the possibilities are endless.

While the forte of the Duo Jet is obviously the looks and overall vibe, it doesn't disappoint in the performance department either. This isn't a guitar for everyone. Many players will gravitate towards Fender or Gibson for their classic sounds, but Gretsch offers another flavor all its own. That said, I really love the way this guitar looks, plays, and sounds. It's worth every penny. Don't let the Japan make fool you. It's solid. Highly recommended.
Did you find this review helpful?yesno