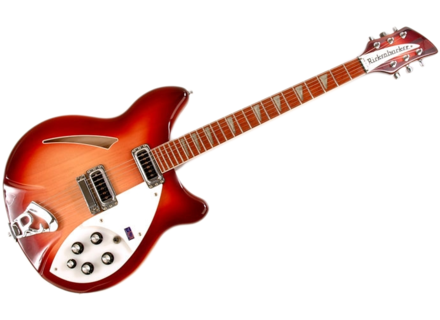 View other reviews for this product:
(Originally written by Inspecteur Van Loke/translated from Audiofanzine FR)
This Rickenbacker 360 is a nice instrument with its rounded shape, its hollow body and its Fireglo finish... The color contrasts with the white binding and pickguard. The finger board has typical Rickenbacker inlays, etc. I chose it because of all these details, although I hesitated between a 620, a 330 and a 350. In the end the looks of the 360 won me over.

It's a Rickenbacker so you'll need some time to feel comfortable with it due to the very slim neck with very flat frets... These guitars are so special (conception, sound and look) and rare.

I like the sound of this guitar, which convinced all my friends. I also like its look.

I like specially the bridge pickup because it sounds as brilliant as a Telecaster but with more lows.

The neck pickup provides many possibilities thanks to a small control that filters low frequencies.

The guitar has two outputs: a normal output (standard) plus a stereo output (Rick-o-sound) that I never use ... Once again a special Rickenbacker feature.

The guitar was made in February 1997.

It's an original guitar you won't see on many stages.

I wanted a Rickenbacker and I bought this 360 Fireglo because it looks great.

It's difficult to find a Rickenbacker, you really have to search for a long time, and its price is proportional to its rareness, but I'm not disappointed.

I own three US guitars: Fender, Gibson and Rickenbacker... But currently I only play with the Rickenbacker.
Did you find this review helpful?yesno
Cookies help us improve performance, enhance user experience and deliver our services. By using our services, you agree to our use of cookies. Find out more.