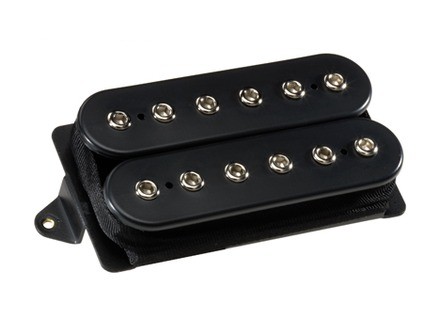 View other reviews for this product:
DiMarzio has always been one of my favorite pickup manufacturers out there for lead tones. Steve Vai’s lead tone was always to die for, so I tried out all of his pickups. While the Evo in the neck wasn’t exactly my cup of tea, this was much more up my alley. The Breed neck seems like it’s a modified PAF Pro more than anything else. However, it’s modified in a good way. You have more power, some more compression but with a nice complex dynamic range that seems to really suit the neck position quite well. The best way to describe this would be to take a PAF Pro and marry it with an Air Norton. You’ll then have the general idea of how this pickup sounds. It’s dark but not overly dark. It still has some nice bite in the treble to help allow you to cut. It has that old school PAF kind of sound going on in the wound strings when you play high up on the neck, but it’s not overbearing like certain other PAF pickups out there. It’s like a modern take on the PAF, really. It works well in pretty much any wood I’ve tried this in. I even tried it in swamp ash, and it really kicked the guitar up a notch. I’ve heard of a few people trying this in the bridge position for a unique PAF kind of sound, and while I think it would sound pretty interesting there, I can’t say I have any first hand knowledge as to how that sounds. I’ve always just used them in the neck positions of my guitar. There are some guitarists out there who only use this pickup, and once you try it, you’ll probably see why. It’s versatile and can do nearly any genre you throw at it.
Did you find this review helpful?yesno