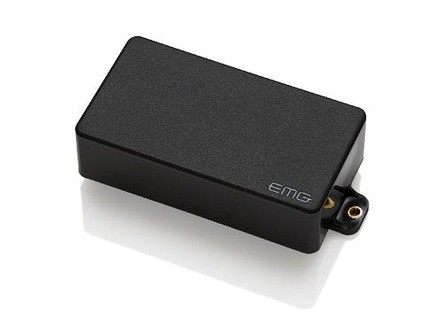 60, Humbucker guitar pickup from EMG in the Active series.

View other reviews for this product:
The EMG 60 active humbucker is a (yes, it's ... EMG) is a magnet in raisin bread. He is best known for being part of the configuration of James Hetfield.

The EMG 60 has mostly t Designed to be possible to "handle position." It is a microphone that has an output level lgrement lower than the 81 or 85 for example and then he prfra for the "bridge position" one of the last two microphones as this position is the one gnralement dedicates the distortions and thus to the microphone output level consquent. That said, nothing is forbidden and the output level of 60 is not at all ridiculous, it's all relative trs (the 81 and 85 avoinent dry matter output level!).

For me, the 60 silent intrt be able to have clear sound with more volume than a single coil (as with the split of 89) and also more "body". This means that the 60 fully convinced me! The argges, remained clear without cruncher (unless you like a bear mad buggers Obviously), but also with notes trs prcis dtach much.

This was confirmed by distortion. Although the saturation n'tait not as aggressive and biting than the 81, but all silent trs same dynamic, and again, trs prcise. This is also one of the other mics in this intrts "handle position" which is the extreme precision of the sounds dlivrs. APRS is to me the great advantage of this microphone on 85 and 89 which are the two most Priss microphones in this position. L o and they will ring imprcis trs round, with a gap DEFINITIONS, the 60, he, will remain clear and understandable, especially with the rhythmic arrangements o Difference is obvious and turns largely benefit the 60.

As lead is the same thing. The notes are good and dtachent trs trs same sentences are clear fast. He sometimes lacks a bit of that fullness which "sing" the notes but also the sound of the characters of the magnet prsence cramique rput more prcis but less "hot" an Alnico magnet (as in 89 and 85).

The EMG 60 has become one of my favorite mics for its versatility and quality sound gnrale. Its weakness is for clean sounds trs pic as is the case for example with a lot of rhythmic "funk" o the use of a single coil is essential.

So fans of EMG looking for versatility and precision both in loving distortion that sounds clear, this microphone is for you!
See the source
Did you find this review helpful?yesno
Cookies help us improve performance, enhance user experience and deliver our services. By using our services, you agree to our use of cookies. Find out more.