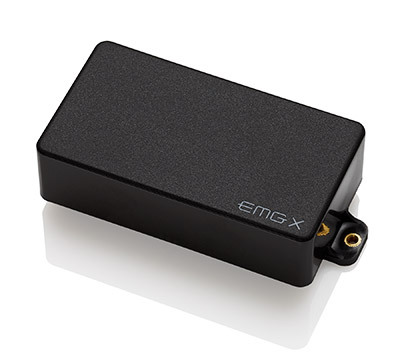 Humbucker guitar pickup from EMG belonging to the X series.

Publié le 04/11/11 à 19:12
In 2009, EMG released a newly revised preamp for all of their models. This preamp is what is used in the X series. The 60X still features the same basic tonality as the original 60, but thanks to the newly revised preamp, it is much more open and less compressed than before.

Recently, people on forums have been experimenting with running pickups at 18V to get more headroom out of their pickups. This helps them sound more organic and less linear and compressed. The newly revised X series preamp basically takes the concept of running at 18 volts to a new level.

The EMG 60X still sounds very much like the original EMG 60. It has this very clear and bright, almost single coil sound going on. It works great with clean tones, but like my previous 60 review, I’m not the biggest fan of it with high gain. The EMG 60X with its revised preamp sounds a lot more open and more organic sounding. Chords sound sweeter, and single coil notes sound a bit more like a passive pickup than an active pickup. Basically, it’s not clipping the signal as much as it used to.

The EMG 60X works in any wood you throw at it, but I find that EMGs typically sound best when they’re in mahogany. Some people argue about EMGs having a signature tone that takes over the guitar, and this is true to an extent, but wood still plays a very important factor. I’m not a huge fan of EMGs in basswood, but they can work with the correct EQ.

If you ever wished your EMG 60 sounded more open and more like a passive pickup, check out the EMG 60X. I’m still not the biggest fan of the EMG 60 series, but it does a great job at delivering good clean tones, which EMGs are fairly infamous for (and I don’t mean that in a good way).
00