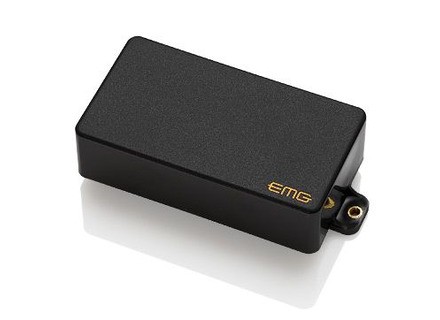 89, Humbucker guitar pickup from EMG in the Dual Mode series.

View other reviews for this product:
Hi

I tried to test all taken active pickups, and split and to add more versatility to my config h / h.
the 89 responds the call. purchased 125 electronic, all inclusive.
Adi one is facing a microphone at the lev rate than the average of the range.
Mount in the neck position.
The characteristic of this micro is that fact that it consists of two models of pickups in a humbucker format, 85 and SA. what good design ...
what is done reprsenten like: 85 to the handle and the SA to the stand (in orientation I mean). has noted that there is also of 89R, which is different from the fact that the orientation of the microphones is reversed.
So we have 2 positions thanks to electronics:
normally, the 85
in split, SA
I live this design interpellbr /> with once against Mount I did not t Strongly believes: indeed, the microphone once splitt (so SA position) dborde of medium, not poss ing little or no bass and treble. it was a matter of his very dry, almost identical a middle position. also the volume was more imposing than standard position (85) So rather c'tait rat!
Fortunately a cal conaissance technical Labor me a b system (after email sent to the service emg asking the validity of the test). here is my micro cabl difframent: always the normal position 85 and then 85 / SA // to split.
rsultat volumes are quilibrs, the SA rings with more bass to approximate a single neck.
Videment I'm on an ESP, so this sounds rather modern, it is far from a tlcaster.
the sound is now fully a Russianness, even if i had my galre (apparently no one is in full ...) this microphone responds perfectly my expectations, I absolutely wanted a 81 on my horizon and the 89 remains the only one who can make the split as sh1 that was original. I play in a metal style / rock and grace this config I could approach more reggae, funk and company ...
I put 8 because i namoins had a scare during the first installation ..

Edit April 09: chang there are several months by a sh2

I rejoind the opinion of bagger (below) wholesale i felt the same impressions that ultimately it. I took the Seymours because I find they have more characters.
nice microphone, I hopes to be able to remake me a config EMG one day, but certainly not with this microphone, I will opt for a longer 60 or 60A. it is the only EMG / splittable neck pickup practice, but even when he reffroidi! to see ..
See the source
Did you find this review helpful?yesno
Cookies help us improve performance, enhance user experience and deliver our services. By using our services, you agree to our use of cookies. Find out more.