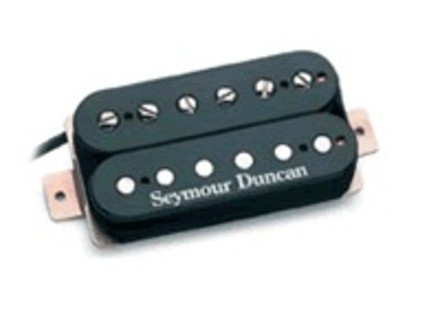 Seymour Duncan SH-1N '59 Model Neck
4
It's a nice microphones passing on almost all types of stringed electric guitar. It's hot and vintage and rather versatile. On a violin or semi-hollow mahogany solid body it sounds beautifully. There is little that the metal that is not in its field. A good choice in general.

joemanix's review (This content has been automatically translated from French)

Seymour Duncan SH-1N '59 Model Neck
5
Bought secondhand, model SH-1 N 4-core with cover, mounted in the neck position on a telecaster 52. Very clean, you can play everything, even jazz. The output level gives a huge step but this soft saturation. I splits thanks to a potentiometer with a switch, it's a bit thin to find something close to the original simple microphone.
Very happy with this microphone that has never made a bad surprise. Very good value for money. As often with SD, micro rings "true."

Izzy11's review (This content has been automatically translated from French)

Seymour Duncan SH-1N '59 Model Neck
4
I utlise for 1 year in position neck. To beginners, from simple Epiphone pickups it, I put myself on his knees before he left round and fat. It has everything you need for beautiful arpges and solos in the neck position. This is an excellent quality-price ratio and, above all, a very good mic. This is the real me a PAF for the blues-rock.
But the use I m'aperois its default, or Plutt its limits: very mushy in rhythm saturates, we must leave or else adgouline crunch of drooling ... In short, great for the clean is very warm, blues very, very good also for blues-rock solos lgre saturation (but it lacks my presence Got a relative APH-1), but I do not recommend it in rhythm with saturation. It is for that I was coupled to (and is often coupled with a bridge in SH4, microwave mat and very sharp in the bright saturated in rhythm.

cowboysfromhell's review (This content has been automatically translated from French)

Seymour Duncan SH-1N '59 Model Neck
5
It is a micro rather fabulous size for clear sound, it rings true every time.

I love the riff alternating with heavy bourinator parties arpge made clear with the 59 '.

It does not sound dirty, not clean typ policy on him, there are some who will find no personality.

Who wants to ring every time it is perfectly plain, trs going well in groups. In fact no one dtest, girls love it and for some it's just a blah.

Scott Bis's review (This content has been automatically translated from French)

Seymour Duncan SH-1N '59 Model Neck
5
I mount an SH-1 neck today with a tb-5 bridge.
To the departure, I was not expecting to ride it, the clips are very long and I have to shorten the screws and put me through Whereas springs.
First test was ringing, I tried the Tb-5 (SH5) with an Air Norton And it was good, between HS-1 has less gain than the Air Norton.
I also tried a sh-2 with Tb-5 and had not sh2 pack.
The marriage of sh1 and SH5 is excellent, far more than the sh2 my ears and a mahogany guitar / table Saddle and Saddle sleeve button / bne.
The sh1 is a little chubby and I was, what I like most is that he will adapt several microphones and low bridge will gain great with high gain pickups bridge.
I tried a Tb-6 with an Air Norton and what not terrible n'tait whereas with the sh1 I'm eager to try.
Ultra-Flexible, serious as it should, less than sh2 comprss quite vintage.
If he had not such long legs, put him in footnote 10, for once it will be 9.
Very good mic, warm, gain just enough variety and open mics bridge.

metallicam's review (This content has been automatically translated from French)

Seymour Duncan SH-1N '59 Model Neck
5
I possde DK2M a home jackson I'm really happy trs, I handle the microphone, I find really cool with TB4 in the bridge is great, this microphone gives a great versatility to the guitar It is nice to play clean, crunch and even a little distorted (up to ac / dc, is the APRS TB4 takes over), compared to a couple of emg I find it much more versatile, the EMG are not really fabulous clean (I'm not telling you anything), the ratio price quality seems top notch compared to other microphones same quality I think if I did not have dja micro I would take, but as I have given I would put a dja sh-1 bridge on my next scratch in Seymour.

So in conclusion, micro really top, it goes perfectly with a couple TB4, clean up the ac / dc is vraimet his field, a fat and warm as we're used to Seymour, I'm agree a wonder, nothing bad, but good.

Seymour Duncan SH-1N '59 Model Neck
5
I add my opinion that will not advance the normment Schmilblic just to join Undertaker: An excellent PAF violin on "The Pauline"; close to Gibson PAF, can be a little more dynamic, less cloying. A neck pickup by reference number, regardless of the style played; I love it so much I bought the version 7 string to equip mine ...
View price information
Did you find this review helpful?yesno

Seymour Duncan SH-1N '59 Model Neck
5
One of my favorite microphones serious ...
The SH1 '59 model is one of the microphones of references in the Seymour Duncan SH4 with the SH6, and SH2. And for good reason, its CHARACTERISTICS sound really INTERESTED in a trs many configurations of wood, and musical styles Varis trs.
Its particular feature is its large range and roundness of tone "twenty years of age" ... A big bump in the low mdiums, loud enough mdiums Cruss and treble Submitted still well, although still quite soft. If one wishes to have a serious sound reproduction micro flatter, with bas mdiums less round, you must opt ​​for the SH2 Jazz Model, absolutely excellent all points of view as well.

For my part, I use a Music Man Silhouette 1991 (with two doubles and the coupled as an SH4 SH1): alder body, neck and affects Rabl. The guitar sound takes CHARACTERISTICS therefore a typical superstrate: an acoustic sound with little mdiums low, high and mdiums Submitted lgrement round and treble trs many drawings. I think it works terribly well on a guitar of this type, because a Relva effective and musical with the lack of low mdiums the guitar (induced by the combination of wood), and softens mdiums and treble by giving them a warmth he might not have a microphone more aggressive in the upper spectrum. Thus, it seems to me perfectly fulfills the rle of a microphone on a guitar severe type superstrate.
In his clear position serious (I only speak of it the way) is trs East jazz (as many good mics for that matter!), And coupled with SH4, the sound is really beautiful and trs INTERESTED (see why DIFFERENT articles: on the SH4, and the Aude Arnaud Qurey Junior, even if it comes up with an SH2 (the microphones are fairly similar all of the same). In saturation, we obtain a sound with a lot of grain, color "old" (but so much contemporary) and rich.

Concerning the other major pan sound of our culture of sound, the guitar "type Gibson Les Paul" (mahogany body, table stocky, round Saddle or mahogany, and rosewood fingerboard and bne: dj has a lot of diffrence between these sound combinations), I think, even if I REALLY did not practice on such a guitar, this mic will provide a sound of a round worthy of a true PAF: low mdium vramient opulent and rich in harmonics, because of high mdiums soft enough creuss Submitted and treble just right, but not too to get a sound with a lot of curves throughout the race, without it becoming REALLY aggressive. It is clear that on a guitar of this type, you must have a desire to rev its round and fat, because otherwise, we can be of (or to dcevoir self-same, because this is my opinion dception because the lack of questioning of the person who acquires such a microphone, plutt caused by the microphone itself) ...

For cons, I do not think it is "banish" a musical style in particular: a microphone, is a RULES (including overall height, to gain, and the height of the studs screws, rglage for finesse), and most importantly, that it lacks treble imply that we know well rglages and the sound of the amp on which it is played (a rglage V of the four would indeed be devastating with such a microphone!). (If you want to know more about my amp, read my article on my head ENGL Savage SE: I give my rglages, which are simplicimes.) Personally, I play in a register mtal progressive and SH1 wonder what should I look at her.

Résumé to: a micro gnial who wants to have a round, warm position serious. Should any guitar with a spectrum homogne. It either Start or Les Paul type, as the spectrum is flat, it's all good. An excellent microphone that for this reason, the RSID Panthon electric guitar pickups.

hugodichon's review (This content has been automatically translated from French)

Seymour Duncan SH-1N '59 Model Neck
5
I use it for almost a year and it's not going to stop.
Its particularity is that, at the base a more micro vintage east blues, rock and jazz is transcandant for metal solo. Proof, Dimebag Darrell (ex pantera, rip ...) was used. Very versatile. Gnial! The only default recess can be its output level lev but good enough if we can play and adjust the gear is not a handicap.
The value for money is excellent, no pb.
Choice again with eyes closed with a clove of garlic in the right hand lol ... For my part I use it with the dimebucker.

Catharsis's review (This content has been automatically translated from French)

Seymour Duncan SH-1N '59 Model Neck
5
I have version 4 drivers and mounted on a Ibanez SZ520QM coupled with SH4JB in bridge.

The sound is not as round as my original neck pickup (this is for only I changed it but the sounds remain clear even when Defines well, sounds a saturated less.

Once we get closer Splitt course of its strat sr good but hey it is when even further. This tight deadlines that we can tapper nice little funk or jazz warmer.

Coupled with an SH4 is happiness.

No regrets about this purchase.