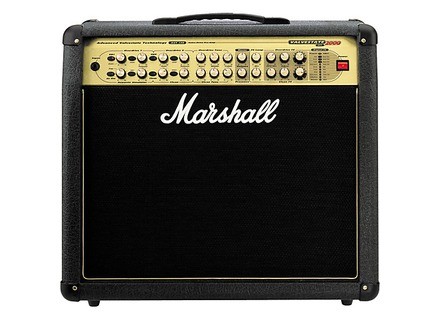 Product replaced by the Marshall AVT150X.

View other reviews for this product:
The Marshall AVT150 amp utilises 'Advanced Valvestate Technology' which basically means it's a combination of a valve/tube amp and a solid state amp. It delivers 150watts of power and has connections for an external footswitch, 2 external speaker inputs, a line in and an FX send and return insert section. In terms of controls, effects and settings, this amp head gives you plenty boosting 2 rows of 12 knobs controlling 4 different channels which are selectable via the footswitch. These range from the usual bass, middle and treble through to DFX mix and adjust for the digital effects section. The 4 different channels to choose from are Acoustic Simulator, Clean, Overdrive 1 and overdrive 2, these are also available on the footswitch as well as are 2 buttons to switch the FX section for Acoustic simulator/Clean on and FX section on/off for Overdrive1/overdrive 2. Along the top row of knobs/controls are the OD1 and OD2 section which are controlled by the same EQ knobs. (bass, middle, treble) and along the bottom row of knobs/controls is the acoustic simulator/clean channels which is controlled by the same (but separate from OD1 and OD2) EQ knobs.

The manual is very detailed but not overwhelming for this amplifier. Marshall know guitarists as good as anybody having been created amps for legends such as Jimi Hendrix, Pete Townsend and Slash, so they know how to put a decent manual together without making things difficult to figure out like some other companies do from time to time. It clearly explains how to set up the amp for any situation, using the FX send and return section, adding additional cabinets, how each channel works and about the built in digital effects section. It is very easy to get a good sound from this amp in fact it's harder to get a bad sound from the amp in all honesty, the manual even explains the inspiration for each channel and some recommended settings to dial in to achieve certain tones from famous bands/guitarists.

This Marshall can produce a really good tone, especially the overdrive/distortion 1 and 2 channels. The acoustic simulator is very impressive, the only thing i have heard that beats it is the Boss acoustic simulator pedal but the avt150's is very close indeed, especially convincing on single coil pickups on guitars like the Fender Stratocaster, plus there are controls for the 'top end' and 'body' so you can dial in your perfect setting for the Acoustic simulator. The clean channel in my opinion doesn't quite live up to the other channels, it is still perfectly usable but i've found on Les Paul and Gibson guitars it can sound quite muddy and not cut through the mix well live, however if combined with certain effects such as the chorus effect then it can be more flexible, but a better option for a clean sound from this amp would be to use the overdrive 1 channel and have a very low setting on your guitar's volume pot as in 1 or 2.

Moving onto the Overdrive channels, OD1 is more of an 'old school' crunchy type of distortion with more of a high mid range bite to it. Very flexible when used in combination with your guitars volume and pickup selectors. You will achieve a nice smooth bluesy tone with the neck pick up, and a driving rock sound from the bridge pick up as you might expect. On the gain control, as a rough guide - a quarter will give you a jangly indie rock tone, half way will give you AC/DC, about 3/4 of gain will give you Guns N Roses and up full will present you with a 'Ride the Lightning' style Metallica sound as described in the manual preset, and to go along with this you will need to press the 'scoop' button in which takes out the mids of the tone leaving you with more bass and treble and an overall aggressive sound that actually reminds me more of the 'And Justice for All' album guitar sound also by Metallica.

The OD2 channel was designed with modern metal in mind, mostly aimed at the Nu-Metal crowd of the early 2000's, and when combined with the scoop switch button (separate from the OD1 channel scoop switch) can produce heavy and brutal sounding results that suggest Slipknot, Korn, Hatebreed and nowadays Slayer. Although with that said it is definitely not pigeon-holed in that genre, having the scoop switch unpressed and the gain set at a nice halfway-3/4 point will give you a great solo tone that has a dominating, thick mid range punch that can bully it's way through the mix to shine through. This setting on a dual humbucker guitar always reminds me of the guitar solo in Crazy Train by Randy Rhodes. When combined with the footswitch and the OD1 channel, you can use this to great effect when playing live, dial the OD1 for crunchy rhythm and then set the OD2 to have more gain and volume to switch to for blistering lead parts or even a louder 'Chorus' distortion setting is a lot less hassle than having a load of pedals with power adaptors and cables etc on the floor to have to switch to.

The digital FX section is a highlight of this amp, and it is utilised very well with no 'cheap' sounds to be found anywhere. It has a lot of different reverb settings to choose from such as hall, room, gated and plate, which can all be tweaked with using the 'adjust control' and then subtly or not-so-subtly blended in with the dry signal using the DFX mix control knob. This method can be used for the other FX such as chorus, flanger, modulation, and delay. Set right, the flanger can be very effective for a 'Hotel California' type effect, the delay also sounds great and is a personal favourite for the overdrive channels along with chorus on the clean channels. The FX do not have the same degree of options as say a dedicated pedal would do, but you would need a spend a great deal on each pedal to get the same basic quality as the FX on this Marshall, a fantastic addition and big selling point for this amp.

To sum up, The Marshall AVT150 amp head and AVT150A cabinet are a great combination of quality, flexibility and value for money. The tone is very good, although a true Marshall valve amp will better it in this sense but at more of a cost and with much less built-in digital effects. Compare to other manufacturers take on the same type of amp with built in effects such as Crate etc, the Marshall AVT150 wins hands down. So if you have the cash and a large guitar pedal board already and need the best Marshall valve/tube sound possible then i would probably recommend you look at some of Marshall's more expensive 'All valve' offerings. However, if you can live with a valve pre-amp and flexibility for playing live and budget are part of the equation when choosing your next amp, then i would strongly recommend you look no further and definitely try this out.
Did you find this review helpful?yesno
Cookies help us improve performance, enhance user experience and deliver our services. By using our services, you agree to our use of cookies. Find out more.