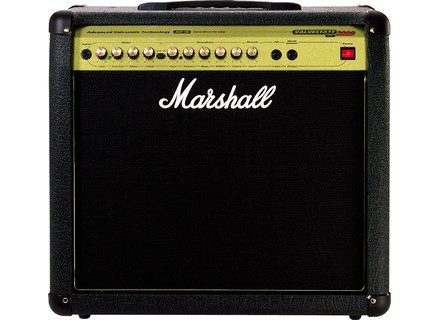 Product replaced by the Marshall AVT50X.

View other reviews for this product:
This amplifier is a combo amp made by Marshall. It's part of Marshall's Valvestate series, which means that it's supposed to sound like a tube amp but use solid-state technology. This is a common feature that has been happening from the early 90s onwards, and it's infiltrated most amp manufacturers since it helps cut costs.
The amp has a 1/4" input, as well as a CD input and a headphone output. The CD input allows you to play along to a CD or similar device to learn songs, which would indicate that this is very much a beginners' amp. The amp is 50 watts and has two channels, clean and overdrive, and reverb.

The controls for this amp include a gain, volume, and two-band eq for the clean channel. Also, there is a gain, volume, and three-band EQ for the overdrive channel. There is one reverb knob which controls the reverb for both channels.
Getting a good sound out of this amp takes a minute, assuming you like solid-state like tones. The manual explains everything with this amp pretty clearly, though it doesn't really get into detail about how to get the best sound.

I don't really think this is one of Marshall's better amps. To be honest, both channels on this amp are lacking. The claim of this amp emulating tube tone is a pretty weak one, to be honest. The clean channel is way too pure to be considered tube. That doesn't mean it's a horrible tone, but it isn't one that I prefer at all. The overdrive channel is honestly not "rock" enough for me. I find it to be overly heavy. With a guitar that has humbuckers, and is suitable for rocking out, you can get some really heavy, almost metal, sounds with it. That makes it good for any metal lovers or even 80s hard rock fans. However, I don't find the EQs to be that great, and the sound is really not that great for anything but the aforementioned genres. Also, the reverb isn't that great either.

This amp really isn't anything special. The price is the only thing about it that is good, which makes sense considering it's not that great overall. The sound isn't the best I've heard from Marshall. For beginners, and guys who need a decent practice amp for metal, this might work, but everybody else could do better.
Did you find this review helpful?yesno
Cookies help us improve performance, enhance user experience and deliver our services. By using our services, you agree to our use of cookies. Find out more.