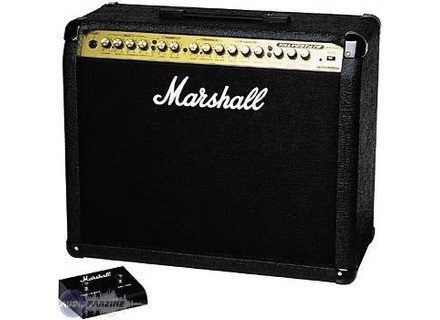 View other reviews for this product:
I recently picked up this amp on Ebay for a little over 200 dollars. A damn good deal. The serial number denotes it was made in 1998 and I’m cool with that.…very cool. I like older women, guitars, Harleys and amps. I don’t want to start a rush to buy the old England made amps, but if you’re reading this…you already suspect what many of us know. Chinese made stuff is OK but when you’re deciding between a product made by people that don’t share the historical and cultural importance of a Marshall amp. Add that the poor slub has moved maybe 100’s of miles from his friends and family to live in concrete structures with hundreds of other workers, versus a scrubby, hard working Brit, that’s able to have a pint on his lunch break, go to the pub with his mates after work, throw darts, listen to the old great British bands on the juke box, bet on which Marshall the song was played on, then go to the old timers table to find out who was right. Those stellar fellas that took pride in their work, their family, Eric Clapton the Beatles and Marshall. This amp has the warm tones and roundness that reminds you of these great people that assembled these amps. Don’t get me wrong. I have Marshall tube and solid heads and cabs, made in China and they work fine. But I can tell a difference. Kinda like having a mute girlfriend that never gives you grief or a blow up doll. The end result and deed would appear to be the same…but it’s not quite the same. This is a 100 watt amp that can push major sound on it’s on or you can plug it into a large speaker cabinet. This amp is a powerful practice amp or can be used as a head for a cabinet. I got this for it’s “Buy it Now” price of 187.00, a little shipping and a new missing Marshall logo that caused it to be ignored by buyers looking for a pristine Marshall. I like it and if I had the money I’d buy another for my grandson.
They won’t be making them in England anymore and if they did, the labor unions of the Brits and the punitive import American unions would make them cost prohibitive. But do yourself and true aficionados’ a favor. Keep your bidding calm, buy quietly and let’s keep it on the down low. Lest some suits and schworms buy all the old ones and jack up resale prices that keep you and your prodigy out of the English Marshall amp market. So…shhh…Let’s keep this just between us friends.