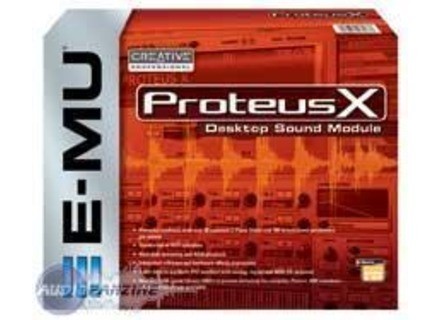 Value For Money : Excellent
View other reviews for this product:
Possdant only a Creative Audigy ES, I used the drivers for the KX ASIO. Now I had some compatibility problems in some programs. I was looking for a small price and ASIO j'tais interested by an Audigy 2 ZS when I Discoveries EMU 0404 with effect processor Intgr Jack O 6.35. Exactly what I wanted. And seeking advice on the card I Discoveries Proteus X also offers a powerful software synthtiseur supplmentaire for 50 euros: this is a great deal and I cracked.
My hardware: PC Athlon 2600 + on MSI motherboard 1 GB Ram and 160 hard drive (8MB cache)
Synthtiseur Technics SX-WSA1, Boss SE50, sound mixing with Hinsley.

The installation is done in several steps since There's drivers, the program Proteus X sound banks, the updates ... Systm is the easiest but passes without problem.
I had no compatibility problems I run under XP SP1.
Gnrale configuration and a bit complex and it is better for a walk on the documentation provided on the CD. This one is more complete but I have not had time to STUDY for all whether it is complete.

After installation of drivers I immediately added the updates and I have no worries as well.
I am using Cubase SX but I have not done anything with him and Proteus X. Using Proteus X 4ms I go down alone (I can not follow in polyphony 2ms)

It's been only three days that I have but I wanted to give an opinion quickly because they are rare. Overall I think the are real but not enough trs Varis despite the amount. I think by the bank against General Midi not great. I want to return to the piano sound bank with a t dom Dj assz critical unlike what it sounds There are several piano sounds and I have not any breath. I have even found it quite good. It is somewhat difficult to compare a real piano but compared to other synthtiseur I think he is doing well trs. So I found a lment comparison with my Technics piano sound is superb for a camera in 1996.
On the report quality price EMU has done something fantastic and it is clear that I do not regret my purchase. J'espre able to find other sound banks to see what the Proteus X is still in the wind because they provided, without being bad, are incompltes, especially hip hop east.
See the source
Did you find this review helpful?yesno
Cookies help us improve performance, enhance user experience and deliver our services. By using our services, you agree to our use of cookies. Find out more.