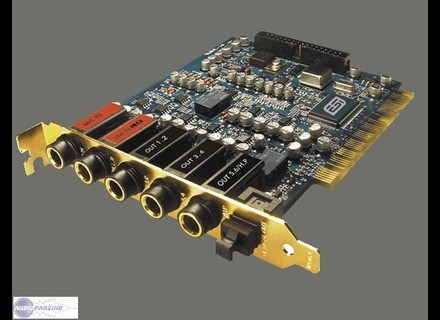 View other reviews for this product:
Map ASIO2 24bits/192Khz, six out asymtriques three connectors, or 3 Stros, plus an optical output from, in / out noon.
I use it mainly for my VSTi. I never use the two inputs (line + mic)
CM ASUS A7N8X-X Athlon 1Ghz, 512 RAM samsung, DD40Go. Speakers MSP5
It is connected to Behringer console.

Install Win98SE under no prob with old motherboard, new motherboard I have problems. The only conflict I do not come strictly as Windows XP, 2000 or 98SE and the motherboard, who refuse manually assigning the irq, so a sound card to IRQ 5
After many hacks, a priori means irq is assigned.
The config of the card is very simple, the windows of the panacea. Bill Gates does not care much of our mouth.
The manual says essentially a slightly more diluted version is available on the ESI website.
esi cot, no prob '!

The drivers are stable in use mao, the latency of 7ms on my machine, only cares to clear the old drivers via the small updater provided by esi makes me crash the XP pc ss
One updating the driver is available, but the bottom line is that everything works.
The card works ss 5 cubase VST, and nothing wrong, everything works nickel: no cuts, few parasites (mandatory in today's PCs, another point for MAC!)
7ms latency in ASIO2!!
I never catch more than six instrumentals, not liking the dfile sounds or instruments in a song, so the machine supports cheerfully.

Bought it four / five months ...
The conversion quality is good, the jacks are of good quality 6.35.
36 MODELS difficult to try before you buy a sound card, so bought the blind.
I bought that card without hsitations.
See the source
Did you find this review helpful?yesno