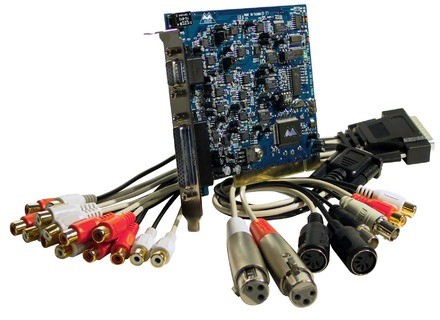 View other reviews for this product:
The M-Audio Delta 1010 LT is a 24 bit/96.6 khz sound card that has eight analog inputs and outputs, SPDIF in and out, and MIDI in and out. This card can record up to eight tracks simultaneously. Two of the analog inputs are XLR, allowing for direction connection to microphones, whereas the other six are through RCA connections. All of the analog outputs are RCA. Unlike its big brother the Delta 1010, the LT does not feature its own breakout box, but instead has breakout cables from the PCI card. It's also possible (in theory) to link and synchronize two Delta 1010 LT's.

There is some latency, but this may be due to my computer being older. I know latency is an issue with digital recording, which is one of the major reasons why I generally record on analog equipment.

The install is relatively simple, just follow the included instructions if you have any questions. I didn't really have any software or hardware conflicts, but I am running Windows XP Service Pack 2, so other operating systems may or may not have issues. That being said, I did at one time attempt to link two Delta 1010 LT's but was unable to get everything to work simultaneously. I eventually lost interest and returned the second Delta 1010 LT.

This is a good card for someone that wants to do some decent recordings with their computer. My first recordings ever were on computer... If I could start all over again, I would have taken the money and either bought a decent reel to reel setup with a mixer, or even a standalone DAW such as the Tascam 788 because of their low cost now and ease of use. I still could have transferred my sound files from a machine like the 788 into the computer, allowing me to mixdown in the computer, but I did not know then what I know now. Still, for someone who wants to do everything on the computer, and doesn't care about the potential for crashes, interrupted recordings, jitter, latency, and all the other crap that comes with recording on a PC, this card may be for you.
Did you find this review helpful?yesno
Cookies help us improve performance, enhance user experience and deliver our services. By using our services, you agree to our use of cookies. Find out more.