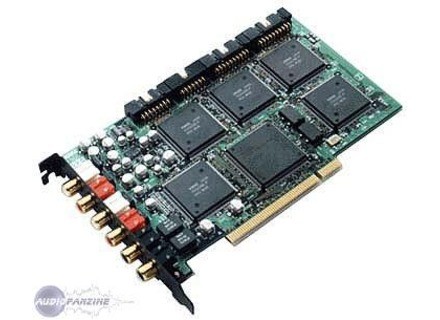 View other reviews for this product:
Only, it has a stereo input / output analog (RCA), as well as input / output SPDIF.
The DSP card used to route the 24 tracks seem as good, and to have an EQ, a compressor or gate, and a delay (dcalage) per track.
She is also team of two multi-effects ... In short, as is so often said 'a O2R in a computer'.
A two complter faade AX44 bnficier for connections in faade (Jack) a transfer to AT AX16 standard ADAT, and SW1000XG, sound card and MIDI sound module.
The acquisition is done in 32bit format but fall dsutude INTERESTED.
Most of the sampled 24-bit software must.
For more information see: http://bootlegstudio.free.fr/studio/manuals/DS2416F.pdf

The installation was without problem on Windows XP Home, with drivers for Windows 2000, even if Yamaha has not updated its drivers since 2002 (I think).
About possibly using a Linux, not only Yamaha has not released a driver (not blame) but simply does not wish to make the computer SPECIFICATIONS card available to dveloppeurs ... (HIGHLY CHARGED)
It also works on Mac, but I do not know more.

No problem of stability dplorer.
It is very well supported by the grace Sonar 2 Audio X console, but Cakewalk Sonar 3 and adcid on the following to ignore it ... Too bad.
The mix, and paramtrage effects are in real time. To review the Direct X plug-ins that take resources and have a latency unbearable.

I have this card since its release, but this is only a few months as I use it to its full potential (without AX16 AT), I use the inserts on my mixer to send the DS2416 and return to my console.
Latency and load on the proc = 0 = Happiness
I was doing before turning on a PII 233Mhz. No worries.

Only concern is that I will not repeat the same purchase: drivers of little or no set day and the impossibility to run under Linux.
See the source
Did you find this review helpful?yesno
Cookies help us improve performance, enhance user experience and deliver our services. By using our services, you agree to our use of cookies. Find out more.