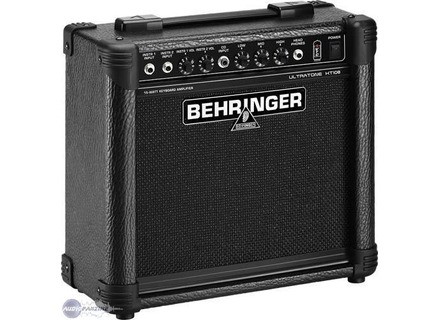 Ultratone KT108, Keyboard Amplifier from Behringer in the UltraTone series.

I bought this amp for 50 euros at Thomann eventually replace my Peavey KB/A100 I find too powerful in most circumstances, too heavy and too unfaithful to the level of sound reproduction.

I really had a nice surprise

. This amp is tiny and lightweight, but sounds good (better than my Peavey). Of course, it is not very powerful, but the 15 watts are there. To give you an idea, it covers a singing voice without any problem. I tested it with an iPod and a number of songs: rock, electro, classic. A level of 7 / 10, there is no saturation, although the serious cash. Be careful not to push too hard either, the HP is only 8 inches.

But unlike my Peavey, the three-band EQ is effective and allowed me to easily find the original sound recordings that I had chosen test. There is a certain roundness in the bass, which does not sound "card" as I expected on an amp of this size, and treble can be crafted well.

Now I almost regret not having the same sound in a slightly more powerful amp, but I really wins in portability! Compared to its price, I put 8 / 10 (not 10 as the wood vibrates when you push a little too low and there is no limiter to prevent damage to the HP).

I received the product this morning, I'll be a while in EDIT if I see one problem (HP that made the soul, vibrations, etc ...) and to share my impressions after use (in churches , small rooms, in my garden).
See the source
Did you find this review helpful?yesno
Cookies help us improve performance, enhance user experience and deliver our services. By using our services, you agree to our use of cookies. Find out more.