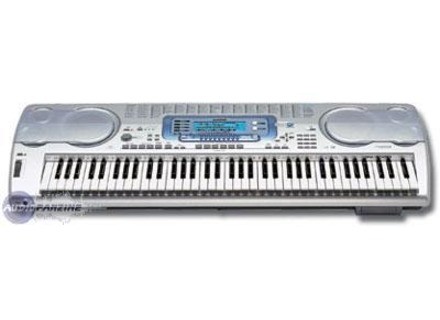 View other reviews for this product:
The Casio WK-3000 is a 76-key portable keyboard designed primarily for home/entertainment use, having rhythms, auto-accompaniment features and a built-in sound system. However, approached from quite a different viewpoint it also has a surprising amount to offer the gigging musician on a budget. More recent models offering near-identical facilities are the WK-3200 and WK-3300.

I am a self-taught keyboard player based very much in a blues style. Over the years I have adopted the stance of a 1960s/70s keyboardist - sticking to one or two sounds (the equivalent of what such a player would have been able to afford in terms of different instruments), and in my case concentrating on electric piano and organ.

For the past two years I have been playing in an 11-piece ska band, and have exclusively used Hammond/Leslie and Wurlitzer sounds. Although my band recently acquired a real Wurlitzer piano, I still use the Casio for its organ sounds, both live and in the studio.

I bought the WK-3000 second-hand on Ebay in 2006 for £150, about half the new retail price (the instrument is now discontinued). Although the seller stated that they would include the power supply, none was provided, and I bought one new for about £12. I also bought a piano-style sustain pedal for about £15.

1. Very playable 76-note keyboard. Not weighted, but solid enough to be able to dig into piano sounds.

2. Drawbar organ feature. This is like a more limited version of Nord's 'drawbuttons', enabling the player to adjust the levels of 9 Hammond-style harmonics. It includes key-click, true Hammond-style harmonic percussion and an eerily good Leslie simulator, with speed change, optional reverb and overdrive. For the price there is nothing else like it.

3. Vintage electric pianos. Somewhere among the literally hundreds of sampled instrument voices are a very realistic Rhodes and Clavinet, plus a KILLER Wurlitzer. Don't believe me? Well, when my band got its real Wurly 200, I compared them, and the Casio was pretty damn close, apart from a noticeable velocity switch. You can edit all the sounds too, add or remove DSP effects, reverb and chorus and save them. I still use the Casio's Wurlitzer sound with delay from the DSP, for dub effects alongside the real Wurly.

4. Very affordable. £150, and if it goes wrong or gets stolen there are usually half a dozen more on Ebay!

1. No facility for an internal volume pedal. Doesn't matter too much as I'm using an external amp and an in-line pedal, but it would be nice to have the volume pedal BEFORE the DSP so an increase in volume actually overdrives the 'Leslie'.

2. The Leslie speed can only be changed by using the button to the left of the keyboard - not by using a foot switch or via MIDI from another keyboard's mod wheel. This is a real oversight, and limits the instrument's potential use as a MIDI-controlled drawbar organ. Shame.

4. Not the instrument's fault this time, but some people have a negative opinion of Casio instruments, however good they sound. A Blues Brothers tribute band with which I did a few gigs got a bad write-up for reasons including my 'toy keyboard' and the fact that it had 'Casio' written on it! For the next gig I constructed a lightweight Korg CX-3 look-alike shell to disguise the Casio, and had no further complaints!

The instrument is built from tough plastic. The base is black and the main shell is painted silver. There are many buttons and a number pad, plus a master volume control. Centred above the keyboard is a clear, blue backlit LCD which can be adjusted for viewing angle. The keyboard itself is Casio's current mid-range design, using the resilience of the keys' own material rather than actual springs. I had my doubts, but four years on there have been no problems. To the left of the keyboard is a pitch-bend wheel and a button with an associated LED. The button has two modes - either momentary (which can only add vibrato to a sound) or latching (for use with the DSP and particularly Leslie speed). There is a fairly beefy sound system with two two-way speakers offering a fair amount of bass for home use.

Final comment? Well, I call the WK-3000 'the poor man's Nord Electro'. No, OF COURSE it isn't as good as a Nord, but for one-tenth the price it's way more than 75% there. What it does offer are highly playable Hammond/Leslie sounds, realistic combo organs if you're prepared to go in and tweak the parameters, plus some of the best vintage electric pianos under £1000, never mind £150. Or you could always use the drum machine, auto-chords and built-in speakers. Cue 'The Girl From Ipanema'...