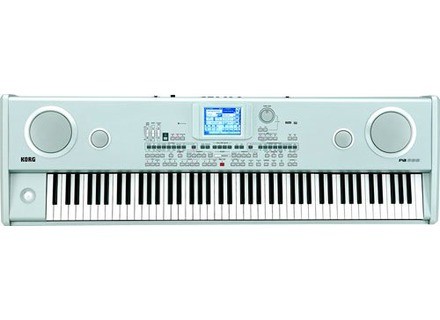 Pa588, Keyboard Arranger from Korg in the Pa series.

Korg says that their new Pa588 Arranger Piano has a 88-note real weighted hammer action keyboard has the superlative feel and responsiveness of a concert grand.

They believe that the Pa800’s powerful arranger tools and intuitive interface make it the perfect musical partner for composers, studio musicians and live performers who demand the highest quality sounds and ultimate flexibility.

Here’s their press release with all the details, decide for yourself…

Comprehensive audio i/o connectivity means you can play the Pa588’s sounds through external amplification and speakers, you can also play sounds from other audio sources through the Pa588’s sound system along with the PAa588’s own sounds. MIDI connectors are provided, allowing you to transfer performance data between other musical instruments and computers. The USB connector allows single-cable connection to your computer for backing-up your performance data or for transmitting/receiving MIDI data.