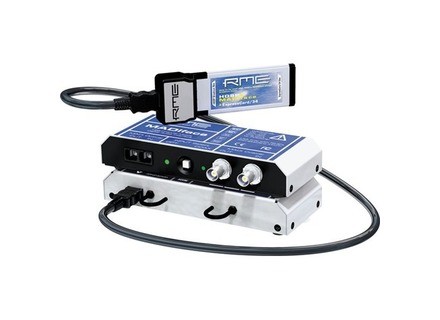 At Musikmesse Frankfurt RME presents the new MADIface, a portable MADI solution for Laptops, providing 128 channels of audio with up to 192 kHz.

RME tells us that they are presenting the world's first and only MADI interface for laptops, based on an ExpressCard: the MADIface. They say RME's HDSPe ExpressCard MADI is a PCI Express solution, which consequently takes full advantage of the new format.

Consisting of the HDSPe ExpressCard MADI and a small breakout box, the MADIface offers full MADI power: 64 channels input and 64 channels output, up to 192 kHz sample rate, in MADI embedded MIDI transmission, complete TotalMix that is remote controllable and has all features of the 'bigger' HDSPe MADI, as well as lowest latency and CPU-load. The power for the breakout box is provided directly by the ExpressCard, so no external power supply is required.

The MADIface is fully compatible to all devices with MADI interface. It can be used in combination with RME's own MADI series products. For example with the ADI-648 an 8 x ADAT optical PC interface is realized. And with the ADI-6432 a bidirectional AES/EBU frontend with 64 channels is set up hassle-free.

Full 64 channel support can also be found in the hardware mixer TotalMix. All 64 inputs and 64 playback channels can be routed and mixed to 64 physical outputs completely freely, which translates to an 8192 channel mixer. TotalMix can be completely remote controlled via MIDI. Furthermore, the hardware delivers RMS and peak level meters for full control over 192 audio channels at minimal CPU load.

While many MADI-based devices require an additional word clock or AES line, the MADIface (like all RME devices) uses SteadyClock™ to extract the reference clock at lowest jitter directly from the MADI signal, making long-distance connections even more convenient. Although not available at the MADIface itself, word clock input and output are thus available when using another RME MADI device.

MADIface offers a virtual MIDI port within the driver. Mainly intended for remote controlling further RME devices, it can also be used to send and receive usual MIDI data. The MIDI data are invisibly inserted into and transmitted by the MADI signal. Therefore a physical access is given at the RME interface connected to the MADIface.

For more information, visit their web site at www.rme-audio.com.