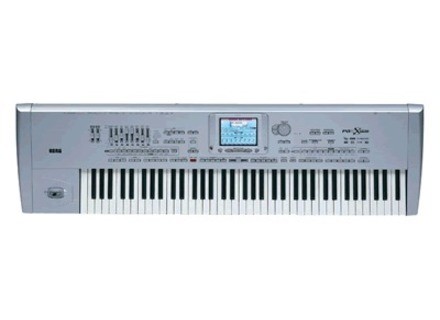 Pa1XPro, Keyboard Arranger from Korg in the Pa series.

View other reviews for this product:
Arranger keyboard art.
It's been a long time I was looking for a machine that can meet both needs in one module. There is the warmth of the sounds (pianos are magical, the breathtaking violin), produce impressive realism means the squeal of fingers on a guitar Nylon, sufficient effort to get out of breath sound of a trumpet, the slide trombone ... In short a full orchestra on his own. Groovy styles so that they precede the tempo. I have seen Poas the range of possibilities notament sampling and two sequencers, but in sound quality and styles .... It would make a dancer John Paul 2. The advantage with this type of machine is that it is possible to assign any instrument on any track arrangements, for example if in a Jazz style, I find the bass a little soft I just assign another one of the 30 proposed to me the effects I want, it leaves a large margin of creativity. I tested a lot of arrangers, I had a Roland G800 that I found quite a lot, but most of the arrangers sin just by their sound, it was offset by another more synth-oriented sound, frankly, I do not see what I can add it as a module Audible. I await your proposals.

The PA1X is very accessible to the informed user. Editing sounds is simple, the manual is well done for (a little large yes, but it must explain the many features of the beast).
The touch screen is a good invention though sometimes I find it does not immediately respond to the touch. The must is the digitization of organ drawbars, we just close your eyes to believe in the church. There are very current styles in which mixing of the Dance with Latin percussion or Techno rhythms that support oriental melodies.
I even find that they went too far in the development of styles that tend to exceed our creativity. Some are too "complex".

I've had two weeks. I bought it on HUGOCEPS.COM, they made me a good rate and I have taken an old nightingale. At first I wanted TYROS Yamaha, I went into a store to listen to a demo, I was a little disappointed, it sounded a little ....." Supermarket ". I did not know the new line of KORG PA, while walking in a store, I stumbled upon a PA1X was on, I played a little bit, the sound of the piano I was impressed (with the pianist I am based close attention to the sounds of pianos), I just feel like a small Mozartian, every note played was suspended in an atmosphere that seemed to have bowed to the beauty of sound.
I stayed a bit shaken by what I heard. I launched a style, and even surprise, acoustic guitar arrangements were chained, drums began to play the harmonic blew me away. He had me at any price (Aïe. ...)
See the source
Did you find this review helpful?yesno
Cookies help us improve performance, enhance user experience and deliver our services. By using our services, you agree to our use of cookies. Find out more.