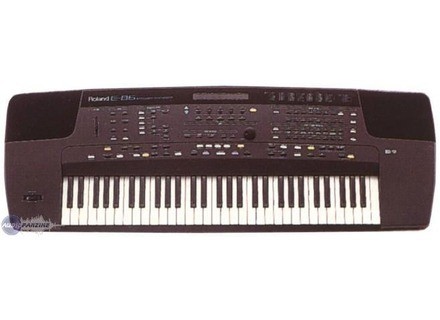 View other reviews for this product:
High end of the SERIES E-1994, the E-86 has emerged with a price of more than 12,000 French francs TTC province.
Of 241 sounds, 56 internal styles, I guess he like the E-56 (a infrieur) a feature edition of sounds.
Compared to the E-56, Roland removed the 8th Bank of styles: the simplified style. They put up the crateur styles as in the E-70, the high-end E-SERIES in 1992. They added a reader / writer drive, and double the number of user programs: 128, then!
However, they removed the 6 tracks squenseur Why? No doubt that one is interested in further suprieurs MODELS: E-300, E-500, E-600 that came out later.
In any case the adding many more styles, there has been a lot of user programs, we change cres many styles, all thanks to the floppy drive. Question sound is the same as the E-16, E-36, E-56. The internal speakers are more powerful than the E-56. 2X7.5 W Rms.

The beginning is simple. APRS, I do not know.

I did not. Issue price, too expensive c'tait the era. Excellent synth otherwise. Ideal for piano bar, host of evening.
See the source
Did you find this review helpful?yesno
Cookies help us improve performance, enhance user experience and deliver our services. By using our services, you agree to our use of cookies. Find out more.