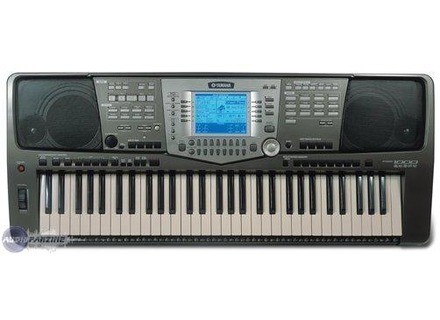 PSR-1000, Keyboard Arranger from Yamaha in the PSR series.

The general configuration of the device may seem complex at first sight but it is not.
Indeed, the handling is fast enough with a manual that seems well explained for simple functions.
So it's fairly intuitive once you are immersed on the keyboard and its LCD menus which are relatively well studied and easy to use.
The variety of sounds is great and sounds very realistic.
In addition, editing of sounds by sound creator is nice. The same for the Style Creator (all depends the use you are going to have on your keyboard after...).
The 16-track sequencer application a little getting used to but the brave will arrive perfectly.
The only problem is though that when you start to want to create pieces a little beefy, 64-note polyphony becomes too tight! In addition, it is unfortunate that all the effects can not be recordable on step sequencers (What ControlChange and parameters to consider?). The manual is a bit tight at this level again (but that is the hallmark of Yamaha! Damage).

I use the PSR 1000 for two years and I have to control about 80% of its capacity. What is already huge technological saw the little monster he is. It is obvious that there is always better, especially since it's a keyboard that date of 3-4 years. But despite my notes a bit harsh (as well as to notes, it is better to be picky!), The arranger keyboard is extremely rich. The small would be less of storage capacity sounds or songs created, you can still save them on disk, but hey, matter of practice! But other than that, do not rely on notes, because this keyboard is semi-pro and is a model of the utmost quality (no more synthetic sounds and hyper hyper unrealistic) with the PSR 1000, up to new technological era for value for money could not be better! Without hesitation, I do it again the same choice, especially since I have not encountered any technical problem on the keyboard for two years while my use is intensive.
See the source
Did you find this review helpful?yesno
Cookies help us improve performance, enhance user experience and deliver our services. By using our services, you agree to our use of cookies. Find out more.