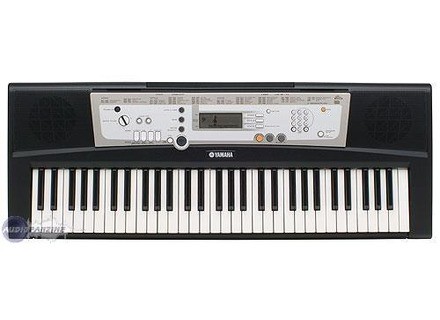 PSR-E203, Keyboard Arranger from Yamaha in the PSR series.

View other reviews for this product:
The Yamaha PSR-E203 is a digital keyboard with built in speakers that is designed for beginners and those interested in getting their feet wet with digital keyboards but don’t want to spend too much money at all. The keyboard of the Yamaha PSR-E203 spans about four and a half octaves and has ¼ inch output connections for sustain as well as to send the signal to another speaker or wherever else you’d like to send it.

The configuration of the Yamaha PSR-E203 is incredibly simple to follow, as it is designed for beginners who have no prior knowledge about keyboards. While there are a lot of handy features in addition to the wide array of tones, including demo songs, a nice screen that shows you which keys are being played on the keyboard in music notation, and a great sounding reverb effect. Whether you know what you are doing or not, figuring out the Yamaha PSR-E203 won’t take long if you play around with it for a little while. The manual for the Yamaha PSR-E203 seems complete and thorough, but I never used it too much because the keyboard is easy enough to use that I never needed it.

I’ve had the Yamaha PSR-E203 for about a year or two and have found that it is more than adequate for the beginner who wants to learn how to play the piano but doesn’t want to spend any decent amount of money. The Yamaha PSR-E203 has all features that a beginner needs with all sorts of different electric and acoustic piano sounds, as well as organ sounds, synth sounds and all sorts of emulations of woodwinds, brass, stringed, and percussion instruments. Its ease of use makes it the perfect candidate to be a beginner’s keyboard. I would highly recommend this for anyone who wants to learn the instrument. The Yamaha PSR-E203 won’t really exceed expectations, as the sounds are the most realistic, but the price makes up for where it might lack in tone. Overall, the perfect keyboard to mess around with and to get acquainted with the wonders of the digital keyboard.
Did you find this review helpful?yesno