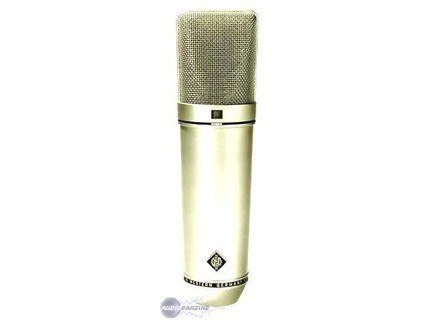 View other reviews for this product:
The Neumann U 67 is a tube condenser microphone designed for use in professional recording studios. It has multiple polar patterns, including cardioid, omni and figure eight. I don't recommend bring this microphone outside of the studio as these are old and fragile at this point. The overall look of the microphone is awesome and has become almost synonymous to what a studio microphone should look like. It also comes with its own power supply, being that it is a tube based mic.

I've been using the Neumann U 67 for about five years. The 67 has a reputation for being one of the best Neumann microphones ever made, and in general is considered one of the best sounding mics of all time. It looks like a U 87, but is tube based and has a warmer sound than the 87 in my opinion. The overall tone is rich and is great for recording just about anything you can think of. It is especially great on vocals and horns of all kinds. It also sounds great on acoustic guitar and other acoustic stringed instruments like mandolin and violin. The price of the U 67 is the furthest thing from cheap, as these are rare and no longer made. They are aimed for use in large, professional studios and are priced that way. If you can afford one of these and are considering buying one, I'm sure you know what this can do and know that it is really one of the best sounding mics in the world. Neumann is known for making the best microphones in the world and the U 67 is one of their holy grails and is one of the most sought after microphones in general. If you can afford one of these bad boys, thats great, but for most of use we're lucky if we get to use one!
Did you find this review helpful?yesno
Cookies help us improve performance, enhance user experience and deliver our services. By using our services, you agree to our use of cookies. Find out more.