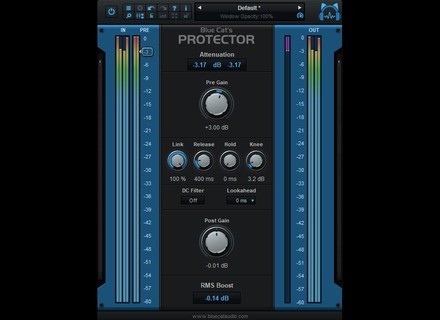 Blue Cat Audio has released Blue Cat's Protector 2.0, a total redesign of its brickwall limiter plug-in for Mac and PC.

The plug-in is available alone or as part of several bundles. New customers can purchase the single plug-in with 25% off, or the "Blue Cat's Energy Pack" dynamics processing bundle with 15% off during three weeks, while existing customers can upgrade to the new version for a small fee. Demo versions can be downloaded on www.bluecataudio.com, in VST, RTAS, AAX, Audio Unit and DirectX formats (32 and 64-bit).