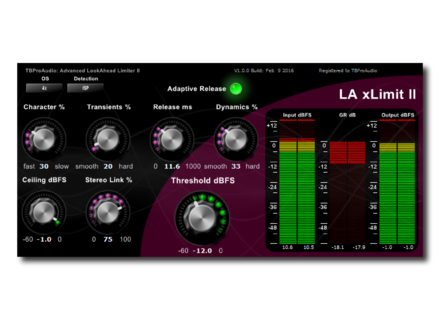 The LA xLimit II is a lookahead, wideband linked-stereo limiter including ISP (inter sample peak) detection and oversampling. It is the successor of the developer's LA xLimit look ahead limiter, compared with which it offers more control over transients and adaptive release curves. It also adds a second limiter stage for better performance in ISP detection mode. According to TBProAudio, this new version was designed to cover a broad range of limiting applications in today's mixing and mastering situations with strong focus on low aliasing.

The LA xLimit II is said to have been specifically designed for mastering, digital editing, multimedia, and any application that requires limiting of the digital signal with high quality and low aliasing. It also features True-Peak limiting (ISP) based on ITU-1770 specification with up to 8x oversampling, and includes an adaptive release control system aimed at reducing massively artifacts caused by fixed release times. In order to increase limiting sensitivity, both stereo channels can be freely linked/unlinked.

The LA xLimit II is designed to be used as last plugin in the processing chain (brick-wall limiting). It adds latency to the audio path, which is usually compensated by DAW (PDC).

This new version is free for registered LA xLimit users, price is €99 (+VAT if applicable) for new purchasers. A demo version is also available (functionality stops after 90 secs, the plugin can be rearmed by mouseclicking the LA xLimit II logo), more details available here.