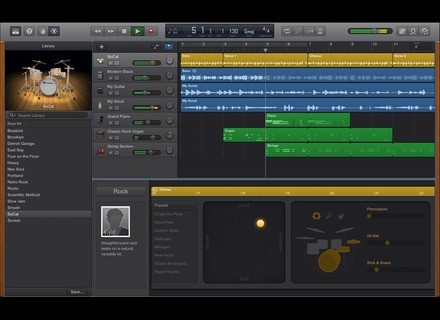 GarageBand 10, Loop Sequencer from Apple in the GarageBand series.

GarageBand updated on both Mac and iOS

Apple unveiled yesterday its new iPad Air, the OS X Mavericks, and updates for the occasion its GarageBand on iOS and Mac to version 2.

The first news is that GarageBand is now free on both platforms, you can complete the sound and virtual instrument offer with an in-app bundle purchase (4.49€)

On iOS, GarageBand v2 received a new streamlined version that suits the new iOS 7. The app now allows you to create up to 32 tracks per project on the latest iDevices equipped with A7 processors and iOS 7 (16 tracks on older models). The 64-bit is supported, as wel as AirDrop and the inter-app audio. Last, a new feature allows to created sampled instruments by dragging and dropping audio recordings.

On Mac, new features are more important but you'll need to update to OS X 10.9 Mavericks to discover them. The GUI has also been updated, and new features were added, such as an "interactive" EQ on each track, Smart Controls which look and behavior  change according to the instrument, integration of Flex Time, Concordance Groove to harmonize the rhythm and tempo of all takes, or the multitake recording. Note that you can create up to 255 tracks per project.

The sound and virtual instrument collection is now bigger, with the new Drummer and its 15 virtual drummers plating different styles (rock, alternative, composer, RnB...) and thousands of grooves and fills combinations. New bass amp models also appeared with clean and distorted sounds, and an Amp Designer allows for creating guitar riffs using 25 famous amp and cab models. You can also create your own pedalboard choosing between 25 pedal models.

Last, you can sync your projects on all your Mac computers and iOS devices via iCloud and you Logic Remote for iPad to control GarageBand remotely on your Mac.

GarageBand also offers guitar and piano courses, with 40 classes for beginners and artist courses for those who want to learn how to play famous songs.

GarageBand on iOS is available for download on the AppStore, the Mac version can be downloaded on the Mac App Store. Visit www.apple.com for full details about the new and free OS X Mavericks.