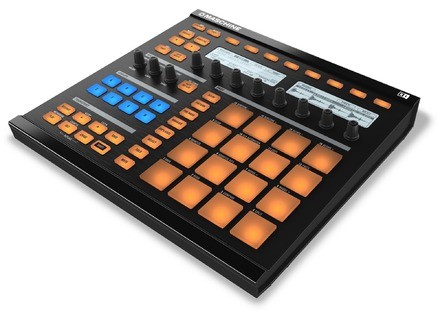 View other reviews for this product:
Native Instruments' Maschine software is designed to turn your computer into a beat production studio. Paired with the Maschine controller, it's some of the most in depth software and hardware combo out there for making beats and grooves. You can use Maschine as either a stand alone piece of software or as a plug-in in Logic or another DAW. Included in the software is a sequencer, sampler, and a sample library, as well as effects and the MIDI controller that helps control everything. I don't own Maschine but I work often at a producer's home studio as his engineer and he uses this all the time for making drum patterns. The software will definitely take some time to learn all the ins and outs of as there is a ton you can do with it between all the features. As with any software there is a learning curve, but I've found Maschine to be pretty user friendly for the most part. The manual is probably something you're going to want to have around if you're just getting started with Maschine.

The studio that I've used Native Instruments Maschine on is Pro Tools HD based, but also has Logic Pro. The producer who owns the studio uses it in both DAW's, while the computer being used is a G5 desktop that's more than capable of handling a lot of tasks at once. Definitely make sure you have a pretty strong system before purchasing Maschine if you want to use it to it's full capacity.

Native Instruments' Maschine is definitely up there with the best, if not the best, groove production pieces of software that I've used. When paired with the in depth and very helpful MIDI controller, you've never had more control over making your beats. There are literally no restrictions with this - only your imagination. Unfortunately Maschine has to purchased individually and isn't included with Komplete or anything like that, but even so it's certainly worth a good look at for anyone making music with your DAW. With more and more people doing everything in the box, Maschine (or something or comparable quality) is becoming highly necessary to have in any working studio environment.
Did you find this review helpful?yesno
Cookies help us improve performance, enhance user experience and deliver our services. By using our services, you agree to our use of cookies. Find out more.