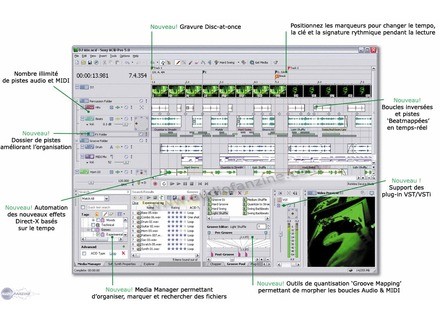 ACID Pro 5, Loop Sequencer from Sony in the Acid series.

View other reviews for this product:
All ok but not clear trs (thank you microsoft) the history of fireworks package install

but as a work with all versions of acid: a config ASIO (even with a latency up) a bug too often, I leave the config and DX is much better now

l but frankly I think it's foutage Geul, must wait three years (the v4 was released in 2002) to have amliorations "logical" (rewire (not work well, like any sync with acid) compatibility VST etc ...), a lot of unnecessary Gadget (function "multi groove," media manager (which delayed the startup of the application which does nothing)) and the same problem of bug.

short, the only things that are worth it to the integration of VST plugin, the possibility to make envelopes on bus (WITHOUT A BUG OR NOT SAVE) and the possibility of cr er tracks "folder" where you can insrer multiple tracks to group their display, mute, etc ...

which is not much

otherwise, we can still save multitrack (who said that an equivalent c'tait software cubase or protools ?????).

thank you sony!!
See the source
Did you find this review helpful?yesno
Cookies help us improve performance, enhance user experience and deliver our services. By using our services, you agree to our use of cookies. Find out more.