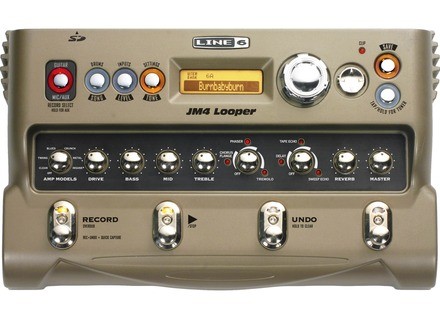 JM4 Looper, Looper from Line 6 in the Stompboxes Modeler series.

All features have been described Samho not in the "News"!

The manual is very well done.
Take your time and read it correctly, because everything is not as intuitive as it ... even if it comes soon! Do not hesitate to tweak, you learn faster ...

Personally, I use it in 3 ways:

-When I go on holiday somewhere! A skyscraper, JM4 and headphone ... it&#39;s still better than Amplug Vox. And frankly, it&#39;s fun on the balcony of a chalet in the Alps at midnight with a good lather! Uh, HS, sorry!

To-work plans and solos on presets "artists" ... or mine or those of the other guitarists of the band!

There, or Me, I&#39;m very dissatisfied, it&#39;s more in terms of effects.
They are very average, and more, it is very difficult to adjust them properly!
But hey, this is not a true multi Fx anyway! Nevertheless, these painful, especially in clean / chorus for me.

Then, other reviews have come down squarely JM4, in terms of sound quality. What I would like to say is that if in this box, there was an AC30, a Dual Rectifier and a Hot Rod, we would know! Or ...

Where is the best sound quality, it is low volume (well, low / medium what!) ... Especially for distortion. A high volume, distortion transo are some limitations, it is true, and you can feel it with this unit! It&#39;s messy, it lacks fullness.
Of bass better than the treble. That&#39;s what I felt especially through headphones. Otherwise, in my config Power Amp Marshall highs have more precision, and all except "pale".

While the sound is quite synthetic in general, this distortion is that the device gets the best out of the game ..
Crunches are means, they lack the thick, heavy sound of this, and the cleans are rather flat, almost "lifeless" ... what the purists Fenderien panic!

But ... all the rest means and this unit still has the average (10 or 11 out of 20, not more) and not 4 or 6 of 20 as we noted other AFiens! Well, that&#39;s their choice. I think their expectations and hopes were such that the disappointment has taken over!

At first, it is not easy to make a perfect loop input. We will resume several times, but we must insist! And after, with the usual manages to make a loop almost "perfect" ... and that runs well.

It can speed up or slow down the presets for some artists ... If it goes too fast, it can be useful. The small downside to this is that the tone will change also. For example, for a preset in MI, if you descedez fèrieure in speed, you will spend in Eb, and so on! Well, it&#39;s not bad ... it work a little differently and on other area of ​​the handle ...

Presets some tracks (ACDC, Police, Metallica, etc ... are not so bad I think. This is my personal opinion, contrary to an opinion that it is to puke!

A small flat also for the level of output volume of the instrument!
On some presets artists, it appears too low and you have to change settings (amp simulation).

This device is intended solely for domestic use, as I describe in the "use"!
If some people expected a great product for live and / or the studio, he missed! Hence, some of their dissatisfaction that I can finally understand! Live, we see mostly the JamMan. Ultimately, we must not mistake the device when it was acquired.
Personally it suits me fine because I was expecting this kind of product, knowing what I was going I do!

To return to home use, it will be used for beginners and scratch "means good," to work ranges, plans and other licks, on sound presets artists (and even on their own), an idea to record output like that! This device is intended for that, guys ... to progress while at home alone, with headphones or an amp!

Zique good at all ...
See the source
Did you find this review helpful?yesno
Cookies help us improve performance, enhance user experience and deliver our services. By using our services, you agree to our use of cookies. Find out more.